Campaigning for change article written on the 21 Sep 2010 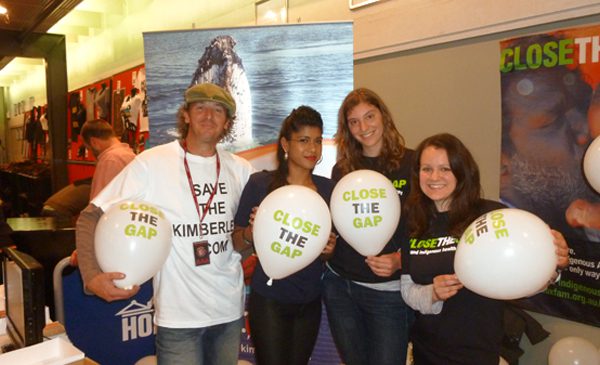 The first time I saw John Butler perform was a historic day. Yes, the John Butler Trio are awesome and seeing them live for the first time almost qualifies as a historic moment all by itself, but this was on the day of the apology to the Stolen Generations. In the atmosphere of joy, relief and hope radiating from the crowds on the lawns outside Parliament House, John Butler jumped on the makeshift stage and gave a beautiful impromptu concert.

Fast forward two years, and the John Butler Trio remain committed to the ongoing struggle for justice and equality for Indigenous Australians. Their current April Uprising tour supports the Close the Gap campaign, with stalls being held at concerts around the country.

At these concerts, we spoke to people about the issues, the campaign, and some things we can all do to make sure the health and life expectancy gap is closed within a generation. Here’s the 60-second lowdown:

Thanks to so many people and organisations getting behind it, the campaign has had some major wins. In 2008, the Australian Government committed to the goal of Indigenous health equality by the year 2030, and announced unprecedented levels of new funding for Indigenous health. But there is still a long way to go. In particular, the government needs to develop a comprehensive and long-term plan of action, ensure the full participation of Indigenous people and their representative bodies, and give more support to community controlled health services.

So what can you do to help Close the Gap?

There are many ways to get involved in the campaign, but here are five things you can do without even leaving your computer: