The tide is high 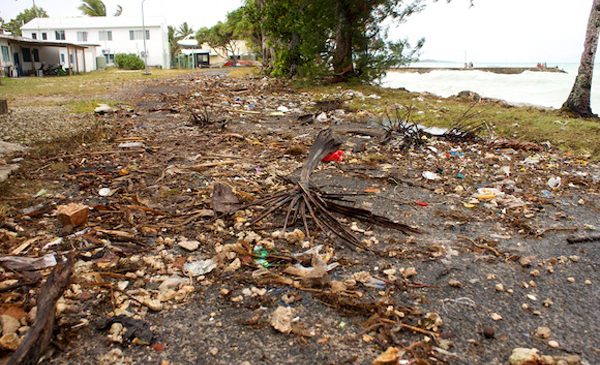 It’s full moon and the high tide is coming in here on Tuvalu. Saltwater is seeping through the ground and creating small lakes where the atoll ground is especially porous. On the streets, under or outside the houses and on the grass beside the airstrip – these are the usual spots where holes in the ground enable the salt-water to rise and fall within just a few minutes. The higher the tide, the bigger the lake is.

It is the fifth day of heavy rains after a drought that has lasted almost without rain since October. The 5.000-liter rainwater tanks that was almost empty before the rain, filled up after the second day. The rainwater has created a small river outside our lodge. Sometimes, when the rain is getting really heavy, it actually feels like I am living in a lake.

The waves are breaking in over the peer in the lagoon and flooding the street in front of the government house. The small road going to the end of the island is partly flooded and covered by old coconuts, waste, cans, stones and everything that the powerful waves can carry up from the shore.

As the waves breaks from both sides of a three-meter broad passage between the islets of Funafuti, I am not 1 meter above sea level anymore, but more like 20 cm. I wonder what it is going to look like when the king tides are coming in with the next full moon.