Australia needs to invest in solutions for the many, not the few

Campaigning for change article written on the 05 Aug 2011 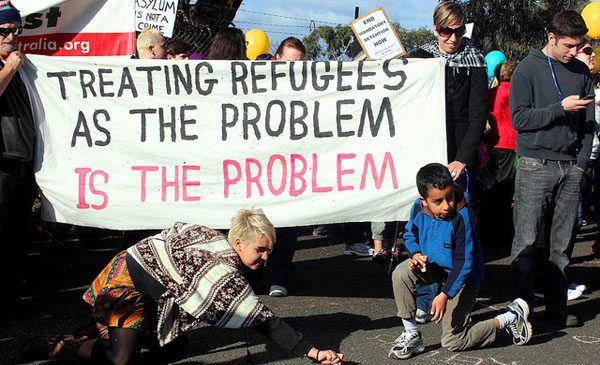 Amidst heated debate reignited by the newly signed deal between the Australian and Malaysian Governments involving deportation of asylum seekers and resettlement of refugees, there has been little mention that the sixtieth anniversary of the UN’s adoption of the Refugee Convention occurred in the same week. Technically the Refugee Convention came into effect, three years later, when Australia’s signed on. As the sixth country to do so, Australia literally gave the Convention life and was instrumental in its design.

It is timely then for us to reflect upon how we are tracking in relation to the spirit of the Convention: – namely, solidarity between states in providing protection for refugees, in full cooperation with the United Nations Refugee Agency, the UNHCR.

Over eighty percent of the world’s 15.4 million refugees are hosted by developing countries – 4 million within the Asia-Pacific region. The number of refugees who achieved a lasting solution to their displacement last year was the lowest recorded in the past twenty years. Last year Australia received fewer than two percent of new asylum claims lodged worldwide. Well under one percent of the world’s refugees were resettled to developed countries. We know that asylum seekers can wait years to have their claims assessed, that processes are not always robust, and that for the vast majority of recognised refugees the prospect of a safe future, with access to a livelihood, healthcare, education and legal rights, is increasingly unattainable. Tragically, for many it may never transpire.

We also know that for people fleeing conflict and persecution, the world over, the dual drives to find lasting safety and to reunite with loved ones, are immensely powerful. Some will attempt to survive in intolerable situations for many years. Some will return, in despair, to countries that simply are not safe. Some will die in so doing, or flee again. Some will attempt to cross yet another border.

Against this backdrop, how are we to judge the Australia-Malaysia arrangement?

Commentators have posed the questions: Will it work? And at what human cost?
To those we should add: Can we do better?

Our Government has framed this as a bold and innovative arrangement that will smash the people smugglers’ business model in order to avert further loss of life at sea, while upholding core human rights, yet providing no preferential treatment, for those who have sought our protection. We have been repeatedly told that the arrangement spells a win for Australia (it will ‘stop the boats’), a win for Malaysia (more of the refugees it currently hosts will be resettled), and a loss for the people smugglers (who will no longer be able to sell resettlement in Australia as a product).

We have been assured that affected asylum seekers will be treated with dignity and respect. And we have been told that the arrangement is the first to be piloted within the scope of the regional cooperative framework agreed through the Bali Process earlier this year. Indeed, at the signing of the bilateral arrangement, Minister for Immigration, Chris Bowen, described it as an initiative to “pull the rug out from the people smugglers’ business model and ensure consistent protection across our region”.

So, will it work?

The answer to that question depends of course upon how you frame the problem. If it is solely the arrival to Australia of boats bearing asylum seekers, and the end goal is deterrence, then yes, it may work. Perhaps it will stop the boats.

But what if we were to take a less insular approach to how we view the problem? What if we were to understand the problem in terms of the myriad, complex and less visible factors that drive people to take the desperate measure of embarking on a dangerous sea voyage? What if we were to acknowledge that a boat journey to Australia is generally just the latest stage of a terrifying and traumatic ordeal that has likely lasted for many years (as recently shown in SBS’ Go Back to Where You Came From)?

We are often told that people board boats because they will do anything to resettle in Australia. We know in fact that sometimes people do not know where they will end up (their smugglers choose the destination). And what if it is not specifically resettlement in Australia that people are seeking, but rather the opportunity to have both a fair and timely assessment of their asylum claim (which is often not available to people elsewhere) and a lasting solution to their displacement? What if their quest is to reunite with family members and they see no other available avenues? What if Australia’s own policies – our broken detention network and family reunion system – are actually part of the problem?

If we understand the problem in this way then this bilateral arrangement will not work. It could, potentially form part of a broader solution, but alone it will not “ensure consistent protection across our region”. Such a goal cannot be achieved bilaterally, or through deterrence.

In its measured public response to the signing of the arrangement, the UNHCR has noted its preference that asylum seekers arriving by boat to Australian territory have their claims processed in Australia, and has expressed the hope that the arrangement will, over time, deliver protection dividends in both countries and across the region.

Perhaps the arrangements for transferred asylum seekers in Malaysia may prove a catalyst, over time, for incremental improvements in conditions for the 92,700 recognised (and estimated 200,000 actual) refugees, asylum seekers and other forcibly displaced people who are living there now without any legal entitlements. Could it in fact help facilitate positive changes in Australia’s own blighted detention network? And could a bilateral arrangement ultimately encourage better treatment of refugees across the region more broadly?

I would love to share that hope. However, I am more confident in my conviction that it is time to move beyond hoping for such outcomes, to developing clearly and publicly articulated plans backed by solid and strategic investments, in order to achieve fair treatment and safe conditions for asylum seekers and refugees across the region. If there are fair systems across countries for determining if people are refugees, or otherwise need international protection, and for providing them with lasting solutions to their displacement, then people will have fewer reasons to keep trying to reach safer places by whatever means. We need to start talking about how effective, well-targeted aid can be used to build consistent protection standards across our region.

So what about the human cost of the arrangement?

We have been told that both countries will win and that people smugglers will lose. But what about the asylum seekers and refugees? Who amongst them loses or gains? And why are those questions not more central to this debate?

Clearly, up to 800 transferred asylum seekers lose. That is the linchpin of this arrangement. But the extent of the suffering they will experience is as yet unknown. A number of important human rights assurances have been incorporated into the text of the Memorandum of Understanding (MOU) between the Australian and Malaysian Governments and the operational guidelines. But these are not legally binding, and there are scant details as to how rights will be realized and what will happen if those rights are breached.

As also observed by the UNHCR, the critical test of the arrangement will be in its implementation, and in particular the pre-transfer protection and vulnerability assessment procedures that will apply in Australia.

In relation to the repeated assurances that all affected people will be treated with dignity and respect, the threatened use of force on Christmas Island if people do not voluntarily board the plane, and announcement that footage of deportations will be posted to social media, are disturbing and hardly an auspicious beginning. If Australia is genuine about this crucial commitment it needs to be modeling it strongly from the outset.

The 4,000 refugees who will be resettled to Australia win. That is a very welcome step, and one that is well within our means and could have been done independently of this arrangement. We could in fact do much more. A former High Commissioner for Refugees suggested that wealthy countries commit to a resettlement quota for refugees of 0.1% of their populations. We are two-thirds of the way to that modest target.

What of the other refugees and asylum seekers in Malaysia and across the region? There are no clear winners amongst them yet through this arrangement. And that is what we need to work towards.

So – could we do better?

Certainly. In many ways. Changes will not come overnight. But we can start by changing the conversation, and backing our words with investments. It’s time to stop talking about deterrence, and start talking about real solutions for some of the world’s most disadvantaged people. We need to be investing strategically in solutions for the many, not the few.