Campaigning for change article written on the 02 Jul 2013 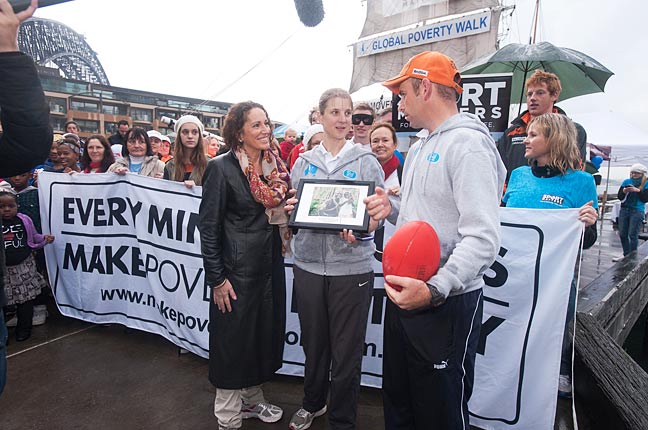 A question I often hear in relation to an issue as immense as global poverty is ‘What can I, as an individual person do?’

The issue of global poverty needs more individuals like Matt Napier. Matt, a landscape gardener by trade, along with his incredible wife Wendy, believe that an individual can inspire a world of difference.

In February this year, Matt started an incredible journey to walk across the country from Perth to Sydney while bouncing an AFL ball. He crossed the Nullarbor in sweltering  40+ degree heat and walked through often torrential rain, hail and shine for close to five months covering a distance of 4500kms; no mean feat for a man who claimed that he wasn’t even that fit before he began!

In the time it has taken Matt to undertake this journey I have had the chance to tell many people about his inspirational effort – to which they usually give a look of disbelief, followed by the question ‘WHY?!’ (a question that I can certainly relate to!)

The answer, unlike the walk itself, is simple. Matt and his wife Wendy are passionate about global poverty. They see the need to raise awareness about Australia’s commitment to providing its fair share to helping alleviate global poverty through our international aid budget. They have seen the positive impacts of Australian aid in assisting the development of the world’s poorest and most needy people in countries across the world. But they understand that there is still so much more to be done.

To celebrate Matt’s incredible feat and the success of the Global Poverty Walk, we felt that it was absolutely fitting to hold a huge finale event at a location as impressive as the walk itself – Campbell’s Cove – with full views of the Opera House, Harbour Bridge and the Sydney city backdrop. While the weather wasn’t  on the same impeccable scale, it was so often remarked to me on the day that seeing as Matt has walked from Perth over the past five months, it was the least we could do (even us uni students) to get up early on a rainy Friday to give him the finale and celebration he deserved.

After meeting a group of supporters at the Opera House in the early hours, Matt walked around through Circular Quay in front of the Make Poverty History Banner, arriving as a group at Campbell’s Cove to a cheering crowd and suitably walking themed music (think The Proclaimers). Despite the rain, I felt that the buzz was certainly there. Another volunteer remarked to me that there were good vibes all round for Matt’s arrival.

The celebration started with an introduction and speech from Dr Helen Szoke, Oxfam CEO and Co-Chair of Make Poverty History who spoke about the importance of Australian aid and how, when it is delivered well is extremely effective at reducing poverty and improving the health and education levels of millions of people around the world. Following this Matt was interviewed in front of the entire group of supporters on Sunrise, with the sails of the ship behind reading ‘The Movement to End Poverty’. What a great picture to be broadcast on national television – a powerful backdrop of supporters and a message to end poverty, with Matt being his characteristically modest self on camera in front.

The morning was complemented by a number of great volunteers representing an array of organisations bringing a great positive energy to the morning. I had the chance to meet a heap of enthusiastic volunteers of all ages. Actually, I would like to thank all of the volunteers who came and supported Matt and the event. You were amazing and your energy, especially that early, was appreciated.

There was a sense of accomplishment at the finale that culminated not only from the end of an incredible 4500km journey, but also from the achievement of a goal. Matt had shown that an individual can make a world of difference.

It has been an absolute pleasure and personal inspiration to work with Matt and Wendy during the walk. An advocate for committing to international aid is needed now, more than ever in Australia to spread the word to the people and the decision makers. And who better to do that than an ordinary individual doing extraordinary things.