By Clancy Moore – GROW Campaign  Coordinator When you think climate change, you might think of smoke stacks and coal mines or oceans dotted with oil platforms. You probably aren’t thinking “climate change” when you crunch on your bowl of Kellogg’s cornflakes in the morning. However, today on World Environment Day (5 June), it’s time to take a closer look at an industry that does indeed pollute the atmosphere – the food and beverage industry. Together, just 10 companies, Associated British Foods (ABF), Coca Cola, Danone, General Mills, Kellogg’s, Mars, Mondelez, Nestlé, PepsiCo and Unilever, produce an amazing 264 million tons of greenhouse gas emissions every year. If the “Big 10” were a country, it would be the 25th biggest polluter on the planet, spewing more emissions than Finland, Sweden, Denmark and Norway combined. The emissions these companies cause are contributing to a growing humanitarian catastrophe. By 2050, there could be 50 million more people made hungry because of climate change. More frequent and extreme storms, floods, droughts and shifting weather patterns are affecting food supplies, driving up food prices and causing more hunger and poverty. And that’s why Oxfam staff and supporters visited Kellogg’s offices around Australia to tell them to stop climate change making people hungry. 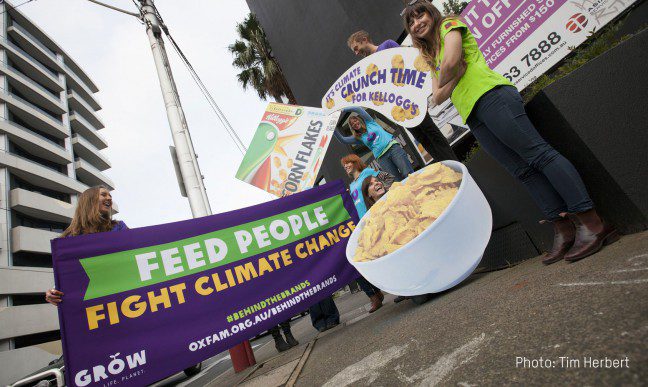 What you can do? Visit Special K‘s Facebook page and copy this message, then post to their wall: Hey Kellogg, I was shocked to find out that you’re feeding/driving climate change. It’s making farmers around the world hungry and homeless. Please cut your emissions now! Our recent report, “Standing on the Sidelines” showed that if these companies replicated the best practice in the sector, they could save a further 80 million tons of greenhouse gas emissions by 2020, equivalent to taking all of the cars in Australia off the road. And that’s where we come in. No company is big enough to ignore its consumers. The “Big 10” companies care what we think, because we buy what they sell. As has been proven over and over again, when enough people come together and urge companies to change how they do business, they listen.