I hate to admit it, but I’m one of those people – when I wake up in the morning, travelling to work, during ad breaks on the TV, I’m on my phone. Often, I’m on Instagram, an app where people share photos with each other across the globe.

I’ve always been struck by the pride and creativity Instagram inspires, the power of imagery in a world of seemingly never-ending words. Here, you don’t have to be an academic, designer or stylist to create a meaningful picture that, well, tells a thousand words.

And kids dig it too. Recent stats show that 41% of Instagram’s users globally are aged 16 to 24, with teens 50% more likely to be actively using Instagram (Globalwebindex, 2014).

While Australian stats are scarce, around a third of US teens consider Instagram to be the “most important” social network, above Twitter and Facebook (BI Intelligence, 2014).

Instagram has amazing potential to be a platform where students can explore educational themes and issues in a deep, creative way, engaging students of all year levels and abilities.

So we created the Close the Gap Student Photo Challenge: A mash-up of action for social justice, peer education, and a way to engage students in ways familiar to their lifeworlds for authentic participation.

In its second year, we received more than 140 entries from across the nation, with the images receiving more than 1000 ‘likes’. And when you hear the stories of our winners, it’s clear the challenge is much more than mucking around on social media, or even being heard on issues of national importance.

It’s also about transformational experiences – the kind that education experts and development practitioners alike can be proud of. 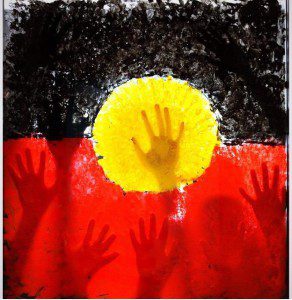 Ce’lanne, Isiah, Sunita, Lloyd, Maxine, Samson and Shaun from Centralian Middle School in Alice Springs won for their photo for the ‘In our hands’ theme. The shot involved painting a classroom window with their hands, then using a lamp to illuminate the shadows.

The students were supported by teacher Rebecca Hunter, who said her students loved taking part in the photo challenge, not least because the health issues Close the Gap deals with are the reality for many of her students and their communities.

“After we had a long discussion about Close the Gap in class, the students’ got really determined. They were saying ‘Well, I’m not going to be like that, because I’m going to be healthy and I’m going to keep going to school,” Miss Hunter said.

“The fact that the challenge was creative was perfect, because it was so easy to do and it gave them an outlet to express their feelings and determination. Plus they loved that we got to use an iPhone in class.”

The win is even sweeter, as the students are part of ‘Small Group 3’, a group of students experiencing behavioural or emotional difficulties, or mild intellectual disabilities. Their vision of a world where the Gap is closed just beat the entire nation.

“The students and everyone in and around the school is so excited and proud that we’ve won,” Rebecca said. “We’ve put it in on our Facebook, in our school newsletter and the students are also doing a presentation at assembly showing their photos to the school.”

To say we’re proud too is an understatement. Clea, a Year 12 student from Canberra Girls Grammar School, won for her photo titled ‘4 the next generation’. Although Clea, 17, is a young activist, she hadn’t really heard of Close the Gap before. As a photography-lover, the idea of taking part in a photo challenge hooked her in.

But her winning photo’s caption speaks for itself in terms of the journey that followed:

“It’s up to our generation to close the gap in indigenous health inequality in Australia so that the next generation don’t face what today’s indigenous people do.

“As I’ve learnt from some of my best friends, the most frequent injustices that Aboriginal, Torres Strait and South Sea Islander people experience do not lie in the past, but in the fact that they still occur every day because the injustices were ingrained into our systems.

“We’d all like to think that the most damage happened as a few standalone events, but most unfairness is the challenge that indigenous people are met with on a daily basis when trying to access basic human rights. Access to healthcare is a fundamental human right and a 17 year life expectancy difference between indigenous and non indigenous Australians shows how severe the breaches are.

“Of course one Instagram post doesn’t change the world, but thanks to the @closethegapcampaign it really opened my eyes to the reality, and desperate need for progression.”

Do you agree with Clea? Because from where we’re sitting, one Instagram post has changed a whole lot. Mount St Bernard College in Herberton, far North Queensland, submitted a whopping 28 photos to the competition, and had five photos (out of a possible 20) selected as finalists. The school is a boarding school, where 70% of its students are either Aboriginal or Torres Strait Islander.

Students across all year levels took part, encouraged by an Art teacher who approached the school’s IT team to collaborate on the project, teacher Brendan Akers said.

There was one image (right) that particularly impressed us. It turns out it was taken using a drone on the day Cyclone Nathan started baring down on their town.

“The kids were determined to get it done. It looks calm in the picture, but the weather was starting to blow a gale and we nearly lost the drone to the wind a few times”, Mr Akers said.

“The number one thing my students want to know is, are you doing it again next year?”

We certainly plan to!