Bangladesh is well known for the appalling conditions under which many of its garment sector employees have to work. Both in terms of the physical conditions, but also the wages they’re paid, which are among the lowest in the region.

Last month was the second anniversary of the Rana Plaza building collapse that killed more than 1100 workers. Employed on poverty wages, and toiling an average of 90–100 hours a week, most of those who died were young women aged 18–20.

Unfortunately, this factory collapse was not an isolated incident.

Bangladesh’s clothing sector has seen many similar tragedies. While the Tazreen factory fire that killed 112 people was also widely reported, four other factory disasters occurred alongside the Rana Plaza collapse in 2013.

The good news is that conditions have improved markedly for garment workers since 2013. The bad news is that tens of thousands of clothing workers continue to work in conditions that threaten their health and safety.

This happens, in part, because some of Australia’s best known clothing suppliers refuse to act.

Fortunately, through the Bangladesh Fire and Safety Accord, many of Australia’s top clothing brands have come together to ensure garment workers are employed in safe factories. Enforced by the International Labour Organisation (ILO), the Accord has freed thousands of workers from the prospect of being crushed as their workplace collapses, or being locked in a burning workplace full of flammable garments.

And it’s people like you, engaging your favourite clothing brands, which have made this possible.

Building on 20 years of labour rights campaigning in countries like Indonesia, consumers like you have been targeting Australia’s top 10 garment retailers to get them to sign the Accord. Most notably by sharing and liking Oxfam’s Naughty and Nice list.

So who’s “nice”? Well the list keeps growing. Of the top 10 companies being targeted in Australia, seven brands have so far signed the Accord, including Kmart, Target, Cotton On, Forever New, Specialty Fashion Group, Woolworths and Pacific Brands. Coles has also pledged to sign the Accord if it returns to sourcing garments from Bangladesh in the future.

The momentum of the campaign has seen other Australian companies who were not originally approached — such as PAS Group’s Designworks — sign the Accord.

And there’s more good news. Several companies have gone above and beyond signing the Accord, supporting projects that provide further benefits to workers and their communities.

But despite the many Australian companies that have met, or exceeded, the Australian community’s demands to improve workers’ conditions, there are still some holding out.

We’ve achieved a lot, but for some Bangladeshi workers, there’s still a long way to go to get a safe workplace.

Whether you’re into denim, or affordable underwear, now’s the time to share your thoughts on what’s right for Bangladeshi garment workers, and what you expect the Just Group and Best and Less to do about it. 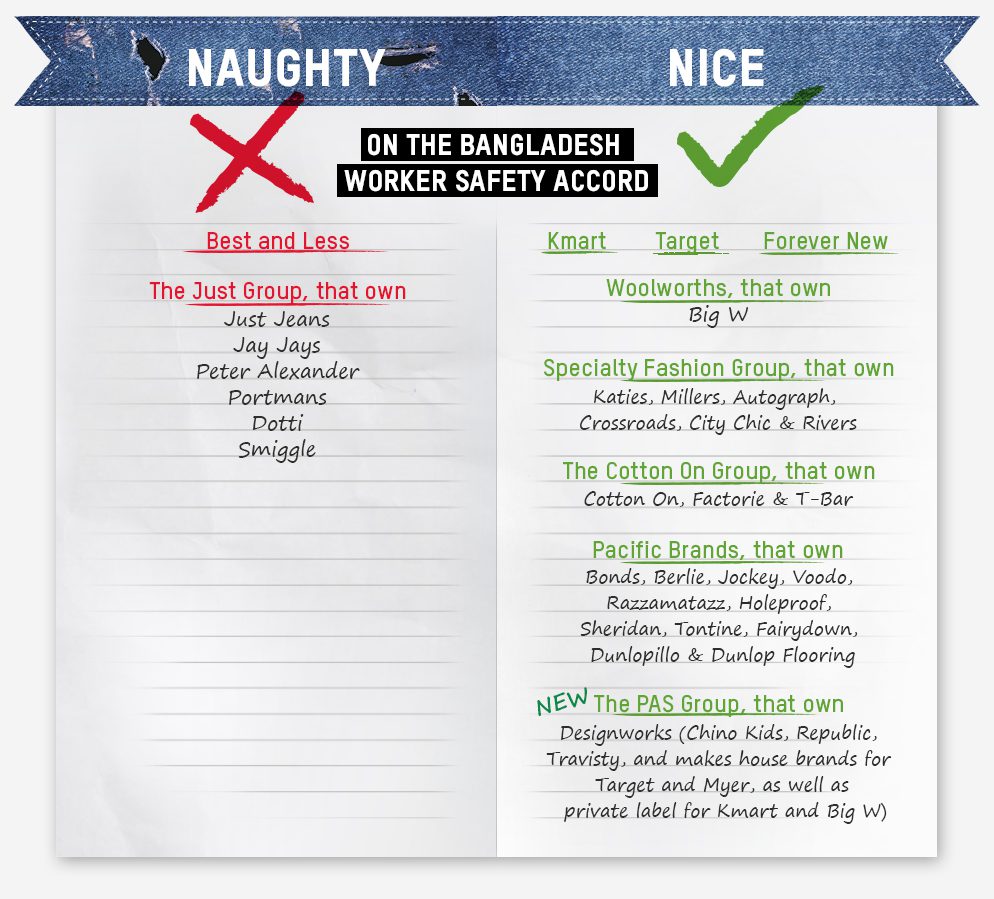