It’s crunch time in Canberra, with key ministers expected to decide on Australia’s post-2020 climate targets over the coming days.

I visited Parliament House this week, accompanied by some amazing Oxfam staff and volunteers, a giant Tony Abbott, some torrential rain, a giant sign post, and the voices of thousands of Oxfam supporters like you. Our message: Australia needs to make the fair and right choice on climate! A choice that backs our Pacific neighbours and provides support for communities already feeling the very real impacts of a warming world.

The wrong choice — climate inaction — means choosing a future where the impacts of extreme weather events, like Tropical Cyclone Pam, are intensified.

We took action outside Parliament House. Inside it, we joined more than 50 civil society organisations in calling for urgent action on climate change. Read the joint open letter to the government here . 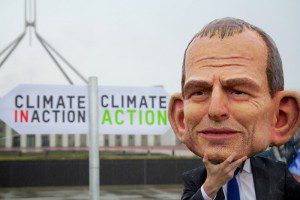 Tell the PM to make the right choice on climate PHOTO: Brendan Walsh/OxfamAUS

Over the past few weeks, Australia has been roasted on the world stage over our current position on climate change. At the same time, the seven most powerful developed nations and some big businesses — like Ikea — have publicly committed to stronger climate action.

International momentum towards a strong and effective global climate agreement is building by the day. And we need to make sure we’re not being left behind by the rest of the world.

Right now, the big polluters are in our government’s ear, telling them to make the wrong choice.

But you can encourage the government to make the right choice on climate.

Climate change is one of the biggest threats to ending global hunger.

Our government’s decision will have serious implications for families and farmers across the world.

Turn up the heat on the government! Write to key Cabinet minsters now.