The women of Somaliland: stories of strength and survival

Blogs, Food & climate change, In the field article written on the 10 May 2017

The women of drought-ravaged Eastern Somaliland are being pushed to the edge, desperately seeking food for their children as their country stands on the brink of famine.

Some have lost family members, most have lost their livestock and means of making a living. Many women in Somaliland are alone with their children in settlement camps, whilst their husbands have taken any of their surviving livestock to find water.

We met with six women in a settlement camp near Burao, who told us their stories of strength and survival. Ayan Said and her son Mohammed outside their home in a settlement for internally displaced people in Garadag.
Photo: Petterik Wiggers/Oxfam

Ayan Said is 23 years old. Her family were forced to travel to look for help when their animals started dying. They had a herd of 300 sheep, worth $24,000 but as the drought wore on, those numbers dwindled to ten.

“We couldn’t do anything for him. I couldn’t take him to hospital, I couldn’t give him the medicine or food he needed. There was nothing we could do,” Ayan said. Ayan near the graveyard where her son, Ismail, is buried.
Photo: Petterik Wiggers/Oxfam

“I am not well. I worry all the time. I am alone here with one child at the moment and I am terrified by hunger and thirst. I have nightmares about that.

“We have no water, no food or shelter. My child did not die suddenly, but I couldn’t do anything about it. We have no food for tonight. I am going to have to ask neighbours for it.

“Mohammed [her son] doesn’t really understand that we don’t have food or what has happened to our family. He asks for food all the time. I try to distract him, I tell him stories, sing and play with him. Sometimes I just don’t know what to say to my little boy.

“People must understand that here we need help. We need food, water, medicine for the sick. Everyone is getting sick. If the rains don’t come things will get much worse – and there won’t be anything we can do.” Hodan Abdi Mohammed has no way of earning a living.
Photo: Petterik Wiggers/Oxfam

Hodan Abdi Mohammed lost all of her six children and her husband during the drought. She told us that they died due to a lack of food and related illnesses.

She couldn’t go to hospital with the children when they were sick as it would have been too expensive for her to travel there. Her livestock have all perished in the drought too, leaving her with no way of making a living. Deqa Abdi hopes the rains will come, so she can restart the herd.
Photo: Petterik Wiggers/Oxfam

Deqa Abdi is 26 years old. She has six children – five boys and a girl. Her newborn, Suleiman, is just eighteen days old and has become sick with stomach problems.

Deqa and her children travelled to find food and water and ended up settling at the camp as she was heavily pregnant and couldn’t travel any further. She has no way of getting water for her and her family without going into debt.

“We eat once a day – only rice. My children are hungry and they complain all the time. I play with them to calm them down; sometimes, to distract them, I encourage them to play fight. I give them water and tea to fill their stomachs,” Deqa said.

We stand here like trees, waiting and waiting [for the rains to come]. But it will get worse. I don’t know what to tell the children.” Muna Said is 21 years old, and has been travelling with her family on foot looking for help. They were forced to stop at the camp as she is nine months pregnant. Her husband is sick and is in the hospital.

“We had nothing left in our village, so we came here. We don’t have food or water here either – we rely completely on others,” Muna told us.

“I am worried about my husband – he is not well and not getting better. I am about to give birth any day. Without food, I am scared I won’t be able to feed my baby.” Faduma Farah Jama outside her house in Fadigaab. She is one of over 3000 internally displaced people in the area.
Photo: Petterik Wiggers/Oxfam

Faduma Farah Jama lost her husband three months ago to measles, and she was left to raise her six children alone. Now her children are sick with the flu and diarrhoea. Before the drought her family owned 400 goats and 14 camels. Now, only a few have survived.

We don’t want to complain, but the men of our family are dead. We don’t have animals apart from these few sheep and goats; we don’t have food. What kind of future are we going to have?

“The water is salty and is undrinkable. Without any support, without the rains and without the men to work and support us, we are eventually going to die. We don’t have enough food, clean water or decent shelter even. Everyone is in the same situation, the poor have become poorer across the whole of Somaliland. We need all the help we can get,”. says Faduma.

“When the children are hungry I try to distract them all the time. I try and tell them a story – sometimes it doesn’t work, and they cry themselves to sleep.” Seynes Awil is 30 years old and has eight children. Her husband is a herder and before the drought, they had 400 sheep, 100 camels and 7 donkeys. Last summer, the animals started dying. Now, only three remain.

Her husband stayed behind to look after the surviving animals. Seynes has no way of contacting him, and doesn’t know where he is.

“My children used to drink milk and eat meat every day. Now they cry all the time. They say they are hungry, they ask for meat and milk. I try and give them a little sugar until they cry themselves to sleep,” Seynes said. “I cannot sleep at night. I worry about the future all the time. My children are suffering from hunger. It hurts me that my husband left me like this, I feel so alone with this responsibility. I have to do everything for everyone. I have to be mother and father.

“My children are sick. My one year old has been sick for two months now, I don’t have any breast milk to feed her with – no milk at all. If the rains don’t come this spring we will probably all die.” 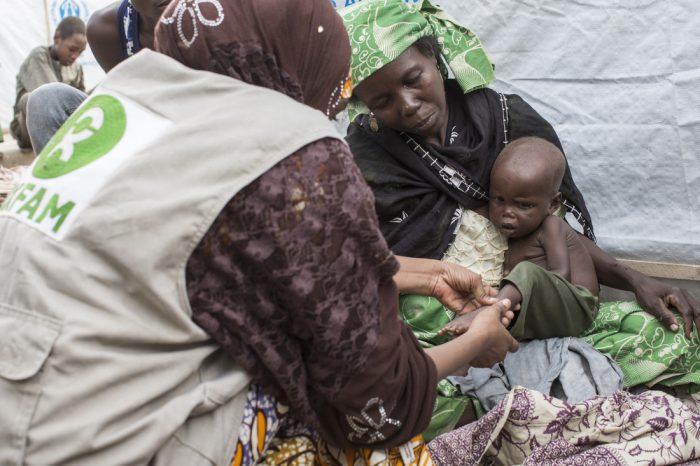 More than 50 million women, men and children are severely hungry across Nigeria, warn-torn Yemen, South Sudan and the Horn of Africa, particularly Somalia and Somaliland. We must act now to stop this crisis.