Seven months into her pregnancy, Esther fears for the future of her unborn child. In Northern Ghana, where poverty levels are two to three times higher than the national average, the pangs of Hungry Season are felt in all corners of the community. From June to August, three in four families grapple with food shortages — but the greatest burden is carried by women like Esther. With two young children to feed, and a third on the way, finding paid work is a struggle. “Sometimes we don’t have enough grains. We have no alternative foods,” Esther says. “I have been hungry and sometimes don’t have food for a few days. When we don’t have food there is no happiness in our home. Everyone is sad.” “I feel pity for my children, but sometimes there is nothing I can do to help them. I talk to my children. I say it’s not my fault — some days we do not have enough to eat.” In rural Ghana, incomes rely on farming. But women are traditionally excluded from the most profitable farming activities, such as raising livestock and growing staple crops. “Men and women are not in the same situation,” Esther explains. “For a man, it is traditional that men are the head of house. I have a younger brother — even he still has power over me.” In Esther’s community, custom dictates that women cannot own or inherit farming land. This limits women’s participation in the agriculture that sustains the region. “Every man is senior to me. I have to give them that respect,” she says. “Women don’t have power. It is not right. We are just living with this situation. We see it as normal.” To help women find independence and a secure income, Oxfam is working with Esther’s community to empower women and to give them a fair chance to participate in income-generating activities, like beekeeping and sustainable farming. Esther joined Oxfam’s Farmer Field School and learnt how to grow soya beans. She now makes money from farming beans to support her growing family. “I’m very happy I have been able to do this,” she says. “I dedicated my time. Every Tuesday — rain or shine. If you go [to class] late, your colleagues sing for you to dance. I didn’t want to have to dance in front of everyone! So I used to go very early.” “After the Farmer Field School, they helped us look for land,” Esther recalls. “We begged our husbands to share their land.”

Around the world, Oxfam supports more than one million women and girls, empowering them to challenge unfair laws, and making sure that women have the same opportunities as men to earn a living. Oxfam’s Farmer Field School gave Esther the tools and training she needed to farm. “The project helped us plough our land,” she says. “At the field school we learnt how to spray pesticides. The field officers showed us how to measure the pesticide and prevent infestations. They came to inspect our farms, and helped us through the process of harvesting.” With her newfound skills, Esther is less vulnerable to the challenges of gender inequality. With the money she earned from her first harvest, Esther bought clothes and paid for her children’s school fees. “I’m happy it has helped us a lot. We are happy to be farmers — it’s what we know.” Inequality and economic disempowerment are root causes of poverty for millions of women like Esther, in Ghana and around the world. But when women and girls transcend prejudice and gain fair access to work opportunities, they can lead happier, healthier, more prosperous lives — not just for themselves, but for the communities around them. “I would like to say thank you for your help,” Esther says. “I will continue to gain strength to carry on this good work.” Smiling, she adds: “I am having an Oxfam baby!” 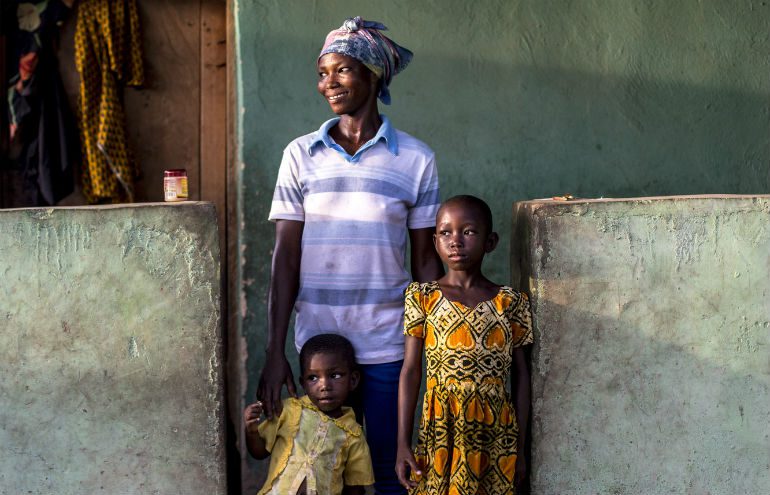 You can change the story for women in Ghana

In rural Ghana, gender equality is keeping women in poverty. Donate today to create pathways for women to earn a living and lift themselves — and future generations — out of poverty. Donate now
Photos: Adam Patterson/Oxfam
×