OUR WORK IN JORDAN

The on-going crises in Syria and Iraq has seen unprecedented numbers of refugees flowing into Jordan. Syrian refugees now make up roughly 10% of Jordan’s population, with the majority living outside of formal camps in urban areas throughout the country and becoming more vulnerable the longer they are displaced

The Syria crisis continues to devastate lives. The needs are colossal and continue to challenge even the most experienced of NGOs and humanitarian agencies. Jordan is also facing other challenges such as high unemployment, a dependency on grants and remittances from Gulf economies as well as continued pressure on natural resources, where it is ranked as one of the most water scarce countries in the world.

Oxfam Australia supports Syrian refugees living in Jordan through livelihood activities in the Za’atari Refugee camp. We are responding to the economic and daily needs of refugees through income generating activities for women and short term resilience opportunities in the waste management sector. Oxfam Australia is committed to increasing the sense of stability and well-being amongst vulnerable Syrian refugee and host community families in Jordan. 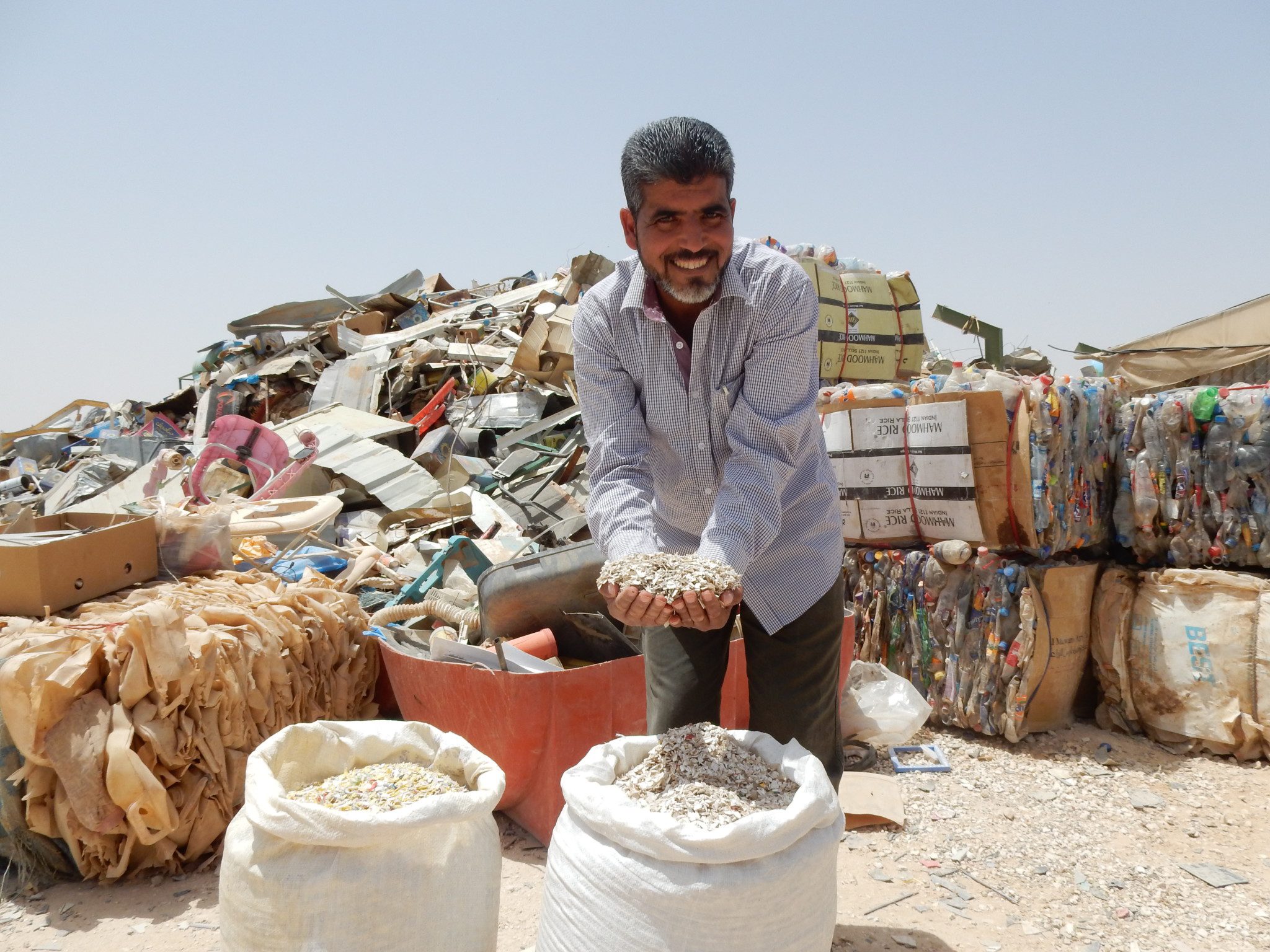 Before the conflict in Syria began, Jasem and his family lived near Damascus and had a house, a car and enough money to live comfortably. Due to the conflict, they fled to Jordan in September 2013.

“Since 2011, hundreds of thousands of Syrians like myself fled to Jordan in search of safety. Around 80,000 people, including my family, now live in Za’atari refugee camp.”

Jasem and his 14 children, six of whom have disabilities, found it difficult to adjust to life in the camp, “We weren’t used to living in tents, to the unforgiving environment, to the frigid cold in winter and the blazing heat in summer”

Jasem started working in Oxfam’s cash-for-work program, which provides a basic income for Syrian refugees in exchange for work. Cleaning the streets of the camp helped Jasem earn some money to support his family and pass the time.

In early 2015, Jasem was approached to be part of Oxfam’s pilot recycling project. Having run a successful business in waste management in Syria, Jasem was able to contribute his skills and experience. The recycling project collects, sorts and sells recyclable materials, providing employment to camp residents and increasing their sense of purpose. It also has an educational element; providing an increased understanding of the importance of recycling and waste management.

Three years later, the pilot project has grown and now collects waste from all districts across Za’atari camp, something that Jasem is very proud of “Our project is responsible for diverting 21% of the waste produced in Za’atari away from landfills – that’s 259 tonnes every week! The garbage piles and pests that I remember from when I first arrived three years ago have all but disappeared.”

The project has provided Jasem with a sense of purpose and the ability to contribute his skills and expertise in a meaningful way. “One day, I hope that there will be peace in Syria, so that I can return with my family to rebuild my business and our beautiful country.”

Oxfam Australia is working to increase formal, long-term job opportunities and income for refugees and host communities in Jordan in the solid waste management sector. This project also has a focus on reducing the barriers that women and people living with a disability face in gaining employment. This $3.9 million two year project (2018-2020) is supported by the Australian Government and implemented by Oxfam Australia.

Oxfam is working to increase livelihood opportunities and provide skills development to refugees, particularly women, in Jordan’s Za’atari Refugee Camp through solid waste management and income generating activities, which will improve the overall environmental conditions of the refugee camp. This $2 million two year project (2018-2020) is supported by the Australian Government and implemented by Oxfam Australia. We know the best way to fight poverty and injustice is to help people help themselves. Change the lives of vulnerable communities in Jordan and around the world today.