Emergencies article written on the 06 Apr 2011 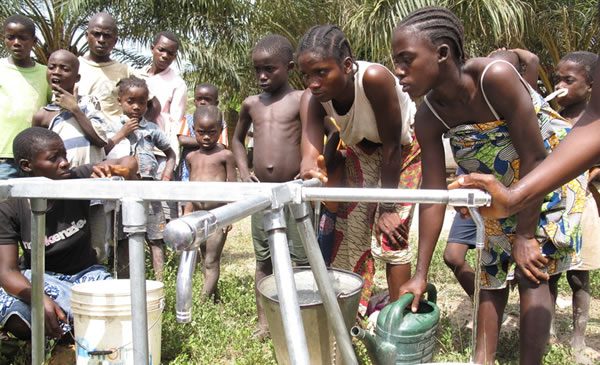 A political crisis is intensifying in Ivory Coast after disputed elections in November 2010, causing thousands of people to flee to neighbouring Liberia, with more arriving every day.

More than 100,000 people have crossed the border from Ivory Coast to eastern Liberia so far, fleeing the threat of violence following November’s disputed election results. The large influx is already putting a severe strain on poor villages, forcing camps and transit centres to be set up, mainly in Nimba county in eastern Liberia and further south along the Ivory Coast-Liberia border.

Our staff in the coastal Liberian town of Harper say that more than 4,000 people have arrived there in the past 24 hours alone, fleeing violence in Tabou just across the border.

“People have been caught up in violent attacks and are running from their homes with nothing,” says Shemeles Mekonnen, Oxfam’s Public Health Engineer in Maryland, south-east Liberia. “[They] are fleeing for their lives and are in dire need of clean water, food and shelter … Refugees will need our help for months to come.”

A podcast posted by Oxfam press officer Caroline Gluck from the border paints an alarming picture of
the difficult conditions facing refugees and the Liberian families helping them:

Most people have fled their homes after armed men stormed their village. Communities in Liberia are generously supporting thousands of people but they don’t have the supplies to provide help any longer. Much more needs to be done to help people who have fled violence and are now stranded with very little.

What we are doing to help

Oxfam has deployed a team of aid experts to Ivory Coast and has shipped in supplies to provide clean water, sanitation and hygiene facilities to up to 70,000 refugees in Liberia. Conditions for refugees and host communities in the border areas are very poor, with people receiving inadequate supplies of food and medicine. We plan to help families hosting refugees to restock diminished food stores, and will continue to assess how to respond to this crisis in the face of ongoing conflict.