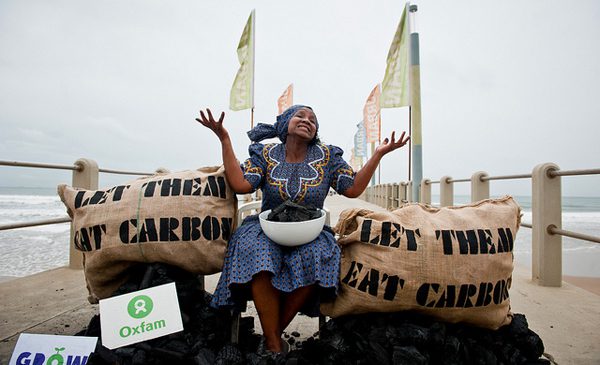 There were two key issues that they debated, drafted, discussed and dissected over two long weeks of talks. Firstly, how to increase the ambition of emissions cuts and ensure a legal framework – the bedrock of which was a second commitment period of the Kyoto Protocol (KP)– with a separate fair, ambitious and binding agreement covering all major emitters. Secondly, how they raise the money needed to fill the Green Climate Fund – the instrument that is designed to pay for developing countries to adapt their economies to a greener path and help their people mitigate against the affects of a changing climate.

The plan that was finally agreed, as the talks overran into a second night, gets the Fund up and running without any sources of funding, preserves a narrow pathway to avoid 4 degrees of warming and gets a second commitment period of the KP without key members.

Let’s be clear, as the delegate say as a precursor to most speeches, the deal that has been done in Durban is not good for the future of the planet, or the poorest and most vulnerable people. Negotiators have sent a message to the world’s hungry: ‘Let them eat carbon.’

The ‘Durban Platform’ can only be described as a major disappointment. But the blame for this delay lies squarely on the shoulders of the US and other countries like Canada, Japan and Australia who dragged their feet from start to finish, mainly over how to cut emissions in line with keeping warming below 2 degrees.

If more ambitious action is not taken soon, farmers in parts of Africa could face a drop in crop yields of more than fifty percent within this generation or that of their children. Food prices could more than double within the next two decades, up to half of this caused by climate change. This makes delivering real concrete assistance to ensure the most vulnerable people can protect themselves from a changing climate even more vital.

We cannot allow the Green Climate Fund to wither on the vine. Governments must identify significant and predictable sources of money for the Fund without delay, such as a tiny tax on financial transactions and a fee on emissions from international shipping.
Governments must bank the pennies won here in Durban and immediately turn their attention to raising the ambition of their emissions cuts targets and filling the Green Climate Fund. If countries don’t ratchet up their emissions cuts urgently, it will be the poorest and most vulnerable communities around the world who pay for this inaction with their lives.

People who care about the fate of the world’s poor and their own economic future should be angry that governments have failed to take adequate action here in Durban. But anger alone won’t solve climate change. There is still an opportunity to push forward in Rio to raise the level of ambition and cut the kind of deal we need. Those who are unable to negotiate for this kind of outcome should simply stay home.

You can also read Oxfam Australia’s official media release on the outcome of the Durban climate negotiations.

Ian Sullivan is an online campaigner for Oxfam GB