Despite some claims, the sky has not fallen on our heads

After putting my 4 month year old son to bed on Saturday night, my head hits the pillow. I’m fast asleep. I sleep deeply, albeit highly attuned to any cries or screams from down the hall way, as is the way with life in my house these days.

I awake. July 1st. Something has changed… and it’s not the fact that my son slept through the night (touch wood that is the norm now). It’s something else. As I open my eyes I look out the window. The sun is shining and the skies are clear. The sky has not fallen in.

Walking down the street to get some milk and the Sunday paper, I see people going to cafes for their lattes and big breakfasts. The economy is still going. People still have their jobs.

And then I realise what it that has changed around me. Australia has a price on carbon. A good first step in tackling climate change for a rich and high (per-person) polluting country like ours. From today, around 300 big polluting companies will pay $23 a tonne for their greenhouse gas emissions. After 3 years, the price will be set by the market.This will help these companies become more energy efficient, invest in renewable energy and reduce the amount of pollution going into our atmosphere. Part of the legislation also has as an investment of $10 billion in clean energy. The money raised will also go to low and middle income earners as tax cuts and household payments to help cover any small increases in costs. 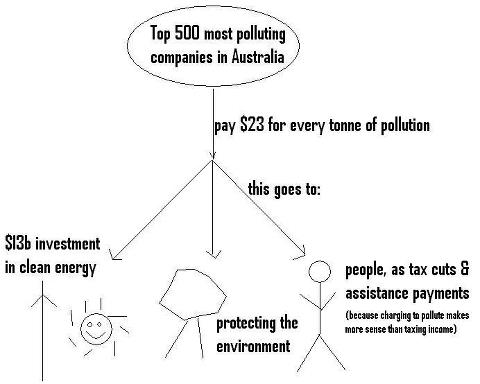 Across the world, other countries are also taking action. Emissions trading schemes are up and running in New Zealand, Britain, France and Germany. India and Japan are taxing the use of coal. China is set to trial emissions trading in six provinces and cities. The scheme will cover more than 250 million people and is supported by huge investments in clean energy. Trading schemes are also set to start in South Korea, California and in parts of Canada. Mexico has also passed historic climate legislation to reduce emissions by 30% by 2020.

So the world is taking action on climate change. Though we also know that climate change is getting worse. From rising sea levels in the Pacific to more intense weather events like the present drought in West Africa, changing weather patterns threatens to undo decades of development and pose new challenges, especially for poor people living in developing countries. These people have done the least to cause climate change and are being hit the hardest.

Arriving home, newspaper in hand, I notice my son staring at something in the distance. I sit watching him processing different sights and sounds. Wondering what his future will be like, I’m happy in the knowledge that Australia is starting to take the first steps in doing its fair share in tackling climate change.