Maria Loretha in a field of sorghum. Photo: Lara McKinley/OxfamAUS

It’s a popular dream: leaving the big smoke behind and heading to the country for a simpler life close to nature. But it takes guts to actually make the break — especially if you’re giving up a comfortable life as a lawyer in Java to live off the land in relatively far flung, undeveloped Flores. But Maria Loretha did just that, relocating with her husband Jeremias Letor to his home town in 1999.

“At the time, many people questioned us, moving back to Flores,” she laughs. “They said, ‘These islands are poor islands. Don’t move there!’” Indeed, Maria admits the transition wasn’t easy. But she wasn’t deterred. Now, 13 years down the track, she cheerfully declares that “I feel like I live an extraordinary life.”

Not only has Maria worked with Oxfam partner PIKUL, but she’s been fully accepted by the locals (who viewed her with suspicion when she arrived) but she’s introduced them to what she believes is the solution to food insecurity throughout Nusa Tenggara Timur province: sorghum. 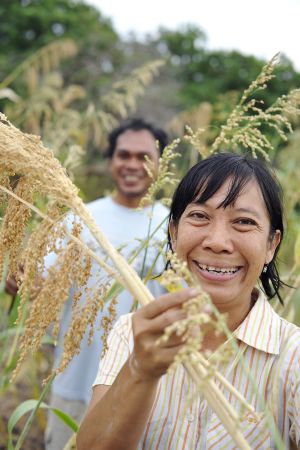 Maria Loretha with her husband Jeremias Letor on their farm. Photo: Lara McKinley/OxfamAUS

Read on for part one of Maria’s amazing story. Interview by Oxfam Australia’s Lara McKinley.

Can you please tell us about yourself?

I am 43 years old. I have four children. Randi is studying agriculture; Brian is in Denpasar — last year he was in an exchange program in Perth.  My third son is a student in elementary school. The fourth is farming with us here. My husband is Jeremias. He is also a farmer.

We are both farmers now and support our family.

Before you were a farmer, you were a lawyer. How did you come to make such a big change?

At first, we moved from Java because of the financial crisis in 1997-1998. My husband thought, ‘This is a big crisis. President Suharto is being forced to step down. Why don’t we move back to my home town in Flores?’

We moved in 1999. People told us the islands were dry, that they always had drought. That’s a misunderstanding.

When I moved to Flores, I found out many plants can be grown on the island. After a while my husband said, ‘Why don’t we make a living on my family’s land?’  This was his family’s land. It was a big move, but what jobs could I do on Flores Island?  There were only government jobs, and they were difficult to get because of the crisis, and because I am not from there.

Meanwhile, my children were growing up and … we needed to feed them, money for school.  The land we have is quite large, and it could be used for farming, we thought. It’s as much as six hectares, this had potential. So we moved to this island (Adonara Island) in 2005 and I focused on becoming a farmer.

When I moved to this island, I thought, ‘This island is fertile. The land is so beautiful.’ Next to the land we inherited from the family, the river flows to the sea. “I want to be a farmer because farming is an honourable job, a noble job,” says former lawyer Maria Loretha. Photo: Lara McKinley/OxfamAUS

And besides that, to be a farmer is a great job.

I want to be a farmer because farming is an honourable job, a noble job.

What was it like when you first moved here?

It was extraordinarily hard for me to move to the island.  It was a real challenge. My husband said, ‘Really? You want to live like this?’ I was really overcome with hardship.

I knew there was no electricity, no food choices, as well as problems such as lack of human resources, a different culture and character, a hard type of people [for outsiders].

My family really questioned me whether I wanted to face this new life. I come from an educated family. My father is a judge. My relatives are married to foreigners. My family’s life is really comfortable.

But I have strong support from my father. He said, ‘Please go live on the island and you can get everything you need from nature. Nature will give you everything.’ But it wasn’t true!

But you can get food from the earth. You can grow paddy [rice], sorghum, corn, millet.

I feel like I am going back to my origins, my village in Kalimantan, pristine forest is everywhere. I feel comfortable. My heart is … extraordinarily peaceful.

What did you eat when you first came here?

When I came for the first time, I saw many coconut and cashew nut trees and it was far away from the market … I thought, ‘What food can we eat?’

And then I told my husband, ‘We cannot live on these plants, we have to survive by planting food plants’. Maria Loretha has sourced more than 12 local varieties of sorghum, a hardy crop that she sees as a solution to food insecurity in the area. Photo: Lara McKinley/OxfamAUS

My husband started to cut many cashew trees, and I cut the young coconut trees. The elders in the village said we were crazy cutting those trees! Because they called me crazy, I wanted to prove their words were wrong.

In 2010 my words were proven. There was very heavy rain during the rainy season. And it didn’t stop at the end of the rainy season. It kept going … until after September and all the cashew harvest fell off. All of the cashew plantation in the whole region, in the eastern island of Flores district fell off, and the farmers became poor and they were trapped because of those cashew trees.

On our farm we had paddy rice, sorghum, beans, corn and our barn was full of food. But other people had no corn in their house. They didn’t realize that there would be an impact of climate change up until that time.

Things improved for me after 2010. People didn’t think I was crazy.

Next time: the secret of Maria Loretha’s success … sorghum

Find out more about Oxfam’s work in Indonesia