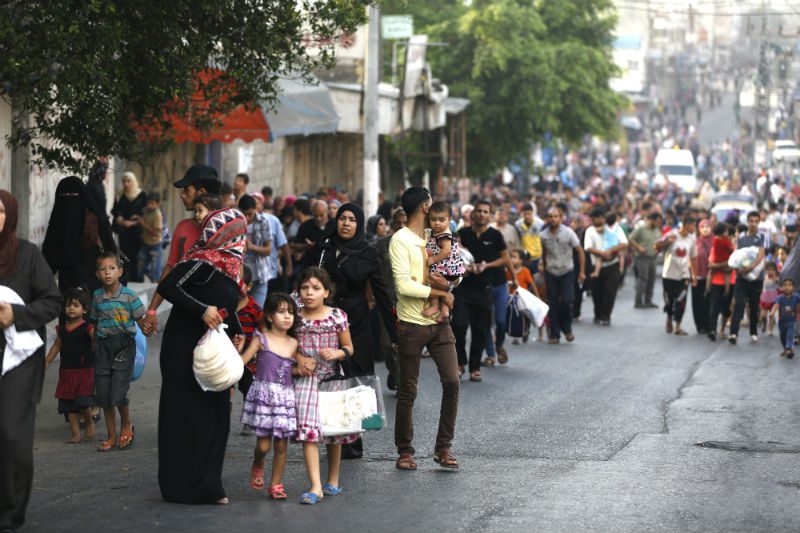 The crisis in Gaza is having a devastating impact on civilians who represent approximately 75% of the casualties so far. Oxfam partner WCLAC (the Women’s Centre for Legal Affairs and Counselling) is collecting testimonies from women in Gaza to describe their lives and fear under the ongoing Israeli airstrikes.

Excerpts of the diaries are below. For the full versions visit the Women’s Voice Archive.

“Each time there is an air raid it feels like an earthquake. My little daughters are petrified as the loud explosions are now occurring day and night. There is no break.”

That night there was heavy shelling.

“My daughter Salma woke up terrified. She came to my bedroom with her fingers in her ears because she could no longer stand it. At around 3am the shelling lessened and I told Salma to try to go back to sleep. She looked at me as if I was insane and said, “Why sleep when I will wake up again?” I didn’t know what to say to this logic. I definitely could not guarantee that no more shelling would happen that night and that she wouldn’t wake up terrified again.

“It is the hardest thing to be a parent in war time. I have become stressed and jumpy. The slightest sound scares me out of my wits, even if it is someone moving a chair in the kitchen… All I can do is wait and hope that my family and I stay safe.”

“We live in sheer terror”

Amal, 40, lives in northern Gaza with her husband and five children.

“I was in the kitchen preparing our evening meal when I heard a roaring sound I’d never heard before. A few seconds later I heard a loud explosion nearby. I immediately took to the ground and so did the rest of my family who were sitting around the dining table. My mother-in-law, who is an elderly woman, was with us that evening. I saw her flat on the ground in the corner looking absolutely petrified. I felt deeply sad and terrified at the same time.”

Amal and her children fled to stay with relatives in other parts of Gaza.

“We waved down two cars that happened to be in the area and jumped in quickly. Shortly afterwards the shelling started again. It was getting dark and the whole atmosphere was just so scary. I screamed from fear and shouted at the driver telling him to go faster and to get us out of the area as quickly as possible. We were all crying in the car as if it was the last moment in our lives.

“My daughter-in-law is nine months pregnant and it is a nightmare situation to even think about what to do with her when she is due. This is what my life in Gaza is like: fear and no sense of security. We live in sheer terror.”

“During the night the Israeli bombardment increases. I cannot fall asleep and I keep my eye on the news updates all the time. I hear the news on the radio or I use my cellphone and check the updates on the internet. What makes it worse is when the power cuts off during the night, leaving us without any source of news. I become more terrified when there is no electricity in the house, when the only light we see is the flash from Israeli bombs exploding.

“Like most people in Gaza, we can’t afford the fuel to run our electric generators. We sometimes have emergency power for a bulb, but not enough for the fridge and other appliances… we can’t store much food during these difficult and dangerous times.”

15 July: “Where are we supposed to go? Nowhere is safe anymore…”

Samar, 32, lives in Gaza City with her husband and two young sons, aged two and six.

“We have been living in terror over the past week with non-stop aerial bombardment. But last night was the worst by far. At around 11:45 pm our telephone rang and my husband answered. I saw his face turn pale as he listened and didn’t say a word. He hung up and told me it was a recorded message from the Israeli military telling us to leave our house and go somewhere else. I collapsed when he told me this. A few minutes later my mother-in-law, who lives in the apartment below us, received the same message. I didn’t want the boys to know about the message because it would terrify them.

“My husband and I decided to ignore the message because we could hear explosions all around us outside and thought it would be much more dangerous to go out. Also, where are we supposed to go? Nowhere in Gaza is safe anymore…

“I stayed wide awake all night. I opened all the glass windows and pulled the curtains. I thought this would at least protect us from flying glass if a bomb exploded nearby. I kept going back and forth to the bathroom. I was terrified not knowing what to expect. Our neighbourhood, like the rest of Gaza, is very crowded. Only a few meters separate one house from another. No words can describe the fear I felt. It was the longest night in my life.

“We haven’t left the house for a week now and they (her sons) are going crazy. I have lost control of myself. I lose my temper for no reason and let it out on my husband. The sound of drones and helicopters hovering all day long is driving me crazy. I am terrified of what might come next. There is no end in sight for us.”

An airstrike hit a house next door to Ola’s early in the morning.

“Moments after the explosion, rubble and dust started to fall from the sky and I was very worried about my children. I hurried outside and saw Riyad hiding under a wooden chair and Bessan standing by the front door with her hands on her head. They were unhurt. I then saw my husband’s niece who is four, lying on the ground with blood coming from a head wound. My children were watching in shock as she bled. I started to scream and shout until someone came with a car and took the child to the hospital. Then I started to look for Abed. I could hear his voice but I couldn’t see him. He was crying.

“My husband and my brother-in-law came and we started to remove the rubble with our hands, making way for us to get to the bedroom where Abed was sleeping… The roof of the bedroom was hanging from one corner because two walls had collapsed. Luckily Abed’s cot was in the corner which did not collapse. He was unhurt. I held him up and hugged him tightly and checked to make sure he wasn’t injured. It is a miracle that he survived, I still cannot believe it.”

“It is becoming unbearable for me and my family, and yet we have suffered nothing compared to thousands of other families in Gaza. Everything around me is scary. I haven’t been able to sleep properly for more than two weeks and my body cannot take it anymore. I am physically and mentally unable to cope. The bombing doesn’t stop and horror stories from people around me are unbelievable.

“When the ground offensive started last week thousands of people from Ash Shuja’iyeh neighbourhood flooded the streets in central Gaza where I live. I couldn’t bear to look out the window. I myself was frightened to see such desperate people who have lost everything and are in a state of utter shock… I was told some people sought shelter at the church, others in a garage and others in a stairwell… All day today I have been hearing the sound of ambulances around. I have never been so scared in my life. I am stressed and in panic 24 hours a day.

“We are currently receiving four hours of electricity a day. We are lucky because we have our own generator which we turn on for a few hours. We turn it on scarcely because we are not sure we will be able to buy more fuel when we run out. There is no fresh food in the shops anymore and whatever was there is now spoiled because of power cuts. I spend my entire day worrying about tomorrow. In short, we are living in hell.”

← Growing food in a changing climate, Vanuatu comes to Australia
Medical staff in Gaza struggle to cope with rising casualties →
×