Health, In the field, Water, sanitation & hygiene article written on the 19 May 2015 Davis has lived in Mukuru — a giant urban settlement, or slum — since the year 2000. The lack of proper sanitation and infrastructure in the urban slums of Nairobi cause vicious outbreaks of disease. But Davis has seen children’s lives saved with something called a Fresh Life toilet.

“If you go into the homes here you will find so many people are sick here,” said Davis.

“It is a very dirty place to bring up a child. Last year there was an outbreak of cholera and we lost a lot of children and mothers, it was declared a national disaster here in Mukuru because the disease affected so many people.

“At my mother’s place, there is no toilet. People around here get diseases such as typhoid, cholera and amoeba because of the bad sanitation. Flying toilets are a big problem. Flying toilets are when people use plastic bags for a toilet, then during the night they just throw them anywhere.

“I have no choice but to live here and I am used to it … But when I see a small child being sick, I feel really bad. At times my brothers and sisters get sick, [but] a child can’t tell you if she is sick. They just cry all day and you have to take them to the doctor … It’s just so painful to see.” 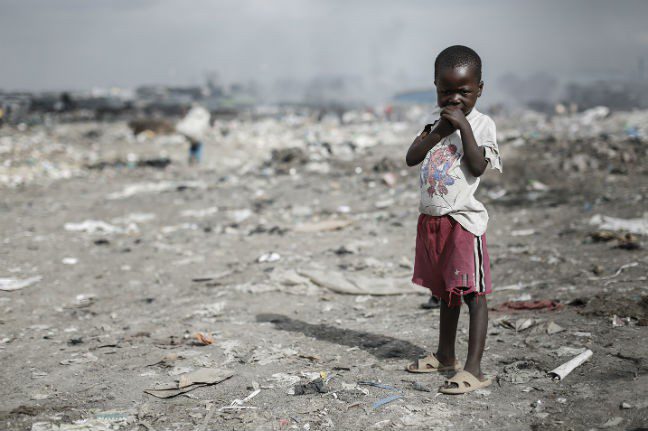 Morgan, who thought he was five but wasn’t sure, plays while his mother works at the Jamaica dump in the middle of the Mukuru informal settlement in Nairobi, Kenya. Photo: Sam Tarling/Oxfam Against this backdrop of desperation, Oxfam has been working with young people like Davis to make a change. We’ve developed a program that’s installing safe, sanitary toilets — called Fresh Life toilets — in schools in Mukuru, and also providing cleaning products and training on sanitation.

In 2013–14, Oxfam installed 38 Fresh Life toilets in 15 schools in the Mukuru informal settlements in Nairobi. This means that every day 2,881 children (over half are girls) and 119 teachers have access to hygienic sanitation. The Fresh Life toilets in schools are free for the children to use and are helping to create a clean and healthy environment for the children to study and play in. The toilets also teach children the importance of hand washing, general health and cleanliness.

This program, made possible by generous supporters like you — along with Davis’s determination to change his situation for the better — gives him and his family hope for a safer future.

“When I wake up each day and I see that my family members and friends are well … that is my motivation. One day when I am in heaven, I would like to look back at my community and see that I have really fought for something,” said Davis.

“If you guys can do something about our situation, we would deeply appreciate it.”

You can keep children safe from disease.