Emergencies, In the field article written on the 19 Feb 2016

Omar*, 13, from Daraa in Syria, flies a kite in Zaatari refugee camp in Jordan. “Every time I fly my kite, I feel free,” he says. Photo: Pablo Tosco/Oxfam

The crisis in Syria is about to enter its sixth year. Before the crisis started in March 2011, Syria had roughly the same population size as Australia. Today, 4.7 million people – or roughly the population of Queensland – have now fled the country because of the conflict.

These refugees are living in camps or among local communities in Jordan, Turkey, Iraq, Lebanon and Egypt. In total, over 13 million Syrians – more than half of the pre-war population – are in need of humanitarian assistance for basics like food, water and shelter.

They are trying their best to survive and live their lives despite the hardship and devastating impacts of the war still raging in their homeland. Nariman and Ahmadel Rajab are refugees from Syria and came to the Zaatari refugee camp in Jordan to flee the violence of the ongoing Syrian civil war.
“It was fate”, said Ahmadel. “It was meant to be. I saw her visiting some relatives in this part of the camp. It was love at first sight. I knew straight away that I wanted to marry her. In Zaatari refugee camp, traders have set up shops such as this bridal shop where brides are able to rent all their bridal wear.

# 3 Get married and have your first dance Nariman and Ahmadel Rajab got married in the Zaatari refugee camp, Jordan. They are refugees from Syria and came to the camp to flee the violence of the ongoing Syrian civil war. Limar was born in Zaatari camp in Jodan and is the first child of Liqaa and Bassel. This is what her mother Liqaa had to say after her birth:

“It was such a beautiful day for me and for my husband to see this sweet baby. I was so happy. After giving birth I was tired but after seeing her I forgot about my tiredness.

“I missed my family so much on that day. I was crying, and until now I miss them so much and think of going back but it’s not safe to go back. I wanted to go to give birth in Syria and be next to my family but it was too dangerous.

“Before giving birth I didn’t mind life inside the camp. My husband tried so much to get us out but I refused. But now it’s so difficult to raise a baby here. The climate is too hot for her during the day, and in the night it’s so cold. Hospitals here are not that good to get medicines and medical services. Adults can get by with the services we have here but for children it’s much harder.

“What I wish from the international community is to help the Syrian people to find a political solution, to help us to go back to our country, to our life, to our future.” A Syrian girl learns the alphabet in an informal school set up by a refugee in a settlement in Lebanon.

Noor, her teacher, explains that most Syrian children cannot attend Lebanese schools. She says: “Parents are poor. They cannot pay for notebooks, pens, transportation and other school expenses”. Omar*, 13, from Daraa in Syria, flies a kite in Zaatari refugee camp in Jordan. “Every time I fly my kite, I feel free,” he says.

Zaatari hosts around 85,000 Syrian refugees of whom more than half are children.

Originally, the camp was planned to host around 25,000 people, but the dramatic increase in refugee numbers throughout 2013 and early 2014 forced the camp to expand rapidly, creating an urgent need for more basic infrastructure. Oxfam is leading a master plan for the entire camp’s pipe water system from which all its inhabitants will benefit.

# 7 Open your own small business 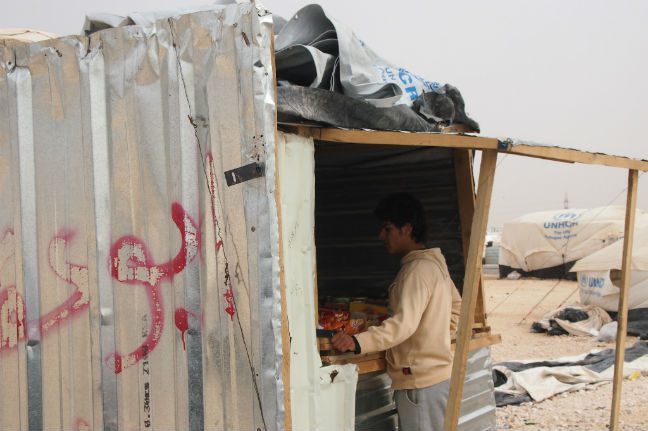 Fatima, 30, began working with her husband, Zackharia, 40, when they opened up their falafel stall in Zaatari camp.

They call their stall the Hama Falafel Restaurant.

“Before, I used to sit in the tent with my kids. It was extremely boring. We didn’t have electricity so we couldn’t watch TV; I couldn’t sit with my friends like I did back home. It was so boring but now, I can work here for 11 hours a day and have something to do,” explains Fatima. Sara, 24, mother of three. Sara and her family fled Hamra, in Syria, just over a year ago whilst in the early stages of pregnancy but had complications when she arrived in Jordan.

“Leaving Syria was a difficult journey because there were a lot of bombs on the way from Syria to Jordan. It took us four days to reach Jordan. I was so scared and then I had severe problems with my pregnancy,” she says.

Oxfam provided Sara with emergency cash to help her pay for surgery which helped to save her life, though she sadly miscarried and lost the baby.

Sara said she was left devastated and attributes her health problems to the stress of fleeing Syria. She is still in severe pain and has to visit the doctor regularly. Her visits to the doctor take over an hour and costs more than Sara can afford. With an extensive experience as a teacher in Syria, Noor, who fled to neighbouring Lebanon, never thought she would start her own school in a tent.

She had to adapt her teaching methods to cater for children who have been out of school, some for many years.

At first resources in the settlement were very limited. She initially had to gather cardboard from a dump-site to write on instead of notebooks.

# 10 Have your heart broken Hayam draws in her notebook in Zaatari refugee camp. Back in Syria, Hayam used to be one of the best artists in her school, but since fleeing the conflict she has not been able to go to school. She now teaches her brother to paint instead.

Her father shakes his head and says, “It breaks my heart to see my daughter at home and not going to school here in Zaatari camp, but I cannot let her go alone. I’m afraid she will get harassed as I have no time to take her myself.”

Hayam wishes she could go to school and paint again. She smiles, “I hope that in 2015 I’ll be able to go back to school and continue my education. In the future, I’d like to become a teacher.”

Join us now to stand #WithSyria.

Originally published on The Hoopla