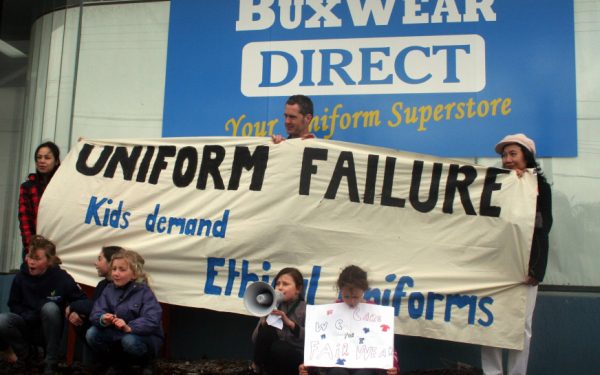 Last month, students, teachers and parents at a Brunswick primary school joined with activists from FairWear to demand an end to exploitation in the Australian garment industry. Students and other protesters delivered a FAIL report card to BuxWear, a Thomastown (Victoria) school uniform manufacturer with a poor record on workers’ rights. According to FairWear spokesperson Mark Riley, workers producing for Buxwear don’t receive the minimum wage or any annual leave, sick leave or superannuation contributions.

The action highlighted the initiative of Brunswick South-West Primary school who have committed to sourcing ethically by using the accredited Ethical Clothing Australia label for their uniforms.

The students who participated in the protest hope that schools throughout the nation will join in and demand that their uniforms are produced under decent and humane conditions. One student commented “I’m glad my school decided to buy the jumpers of a company that pays their workers fairly. I think all companies should do the same thing.”

Which uniforms are ethically produced?