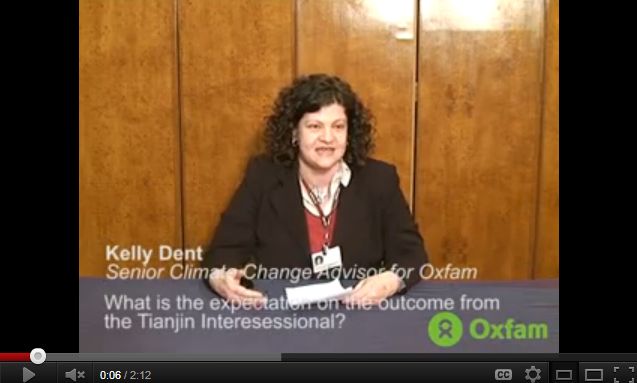 I am at the UN Climate Change Conference in Tianjin this week to cover the next stage of the international climate negotiations. Oxfam’s message is very simple: Climate Changes Kills. And it’s hitting poor people in developing countries – those who have limited resources or ability to fend for themselves – worst.

We want world leaders to ‘sow the seed’ for a fair, ambitious and binding deal on climate change. We are asking developed countries to pay up and help out, by providing the cash needed to help poor people adapt to the changing climate, and acknowledge their duties to cut carbon emissions. I’m feeling the impacts of efforts to cut emissions right now – in my office here in Hong Kong all air conditioning pretty much shuts down after 7pm as a result of green emissions mitigation measures.

So far the media interest in the Tianjin talks has been, well – lackluster – but like many of these conferences before – you never really know until the minute you are there. Still I think this one will hold a bit of a special place in the history of Climate Change talks as it will be the first climate negotiations being held in a Chinese city.

These days, China seems to be able to sell almost anything so I am hopeful the world will pay as much attention as it should because what’s at stake here is not really whether China is being the whipping boy or a good guy who is trying to help climate change — it is ultimately about the poor people that need urgent support and to facilitate international agreements to right past injustices.

In the corridors of the international negotiations on climate change you can easily lose the sense of urgency and ambitious action. For many people around the world, this has been a year from sheer hell.

We’ve seen floods, droughts, fires, storms and other extreme weather events that will only get worse as climate change intensifies. Smallholder women farmers, who produce more than half of the food in many poor countries, are on the front line of coping with the impacts of climate change. In China, where currently the UN-sponsored climate talks are taking place, yields of rice are predicted to drop an average 10 percent for every 1 degree temperature rise.

People most vulnerable to the impacts of climate change, urgently need assistance to adapt. Yet, new research by Oxfam indicates that the poorest and most vulnerable people in developing countries are largely being bypassed by the small amount of climate funds that are available. Less than a tenth of climate funds disbursed to date are estimated to have been for adaptation to help poor people in developing countries who are bearing the brunt of climate impacts. The poor are losing out twice: they are hardest hit by climate change they didn’t cause, and they are being neglected by funds that should be helping them.

Vulnerable populations have been completely shut out the climate negotiation process. So it’s no surprise that they are being overlooked when the checks are written. Negotiators need to learn from past mistakes. Oxfam is calling for a new Global Climate Fund to be set up that gives voice to and is accessible to the groups, including women, who are on the front lines of climate change. Progress on such a fund is a key item for discussion at the climate talks this week in Tianjin, China, and is one of the essential ingredients for progress towards a binding climate deal.

Poor governments must be able to directly access the fund and at least half of the money should be spent to assist poor and vulnerable people to adapt to a changing climate. In addition, we need to ensure that poor countries and women have an equal say in how the fund is managed and spent. A new climate fund must give voice and support to those facing the harshest climate impacts. Only in that way we can start righting two wrongs!

Check out the video above for an explanation, from Oxfam Australia’s climate change adviser Kelly Dent, of what is hoped to be achieved at the Tianjin and Cancun climate talks.