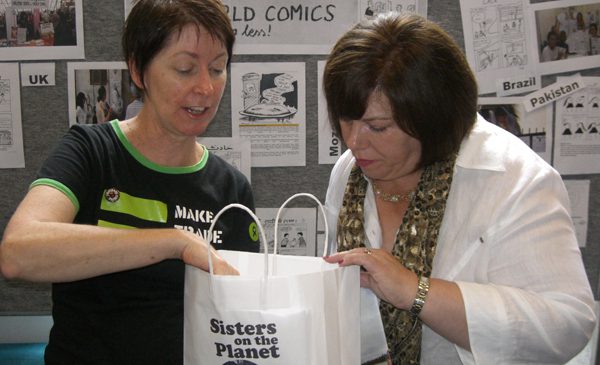 The year might be drawing to a close – but not the energy levels of supporters who are making the most of local opportunities to act on climate change – especially during this important fortnight with the next big round of UN global climate talks underway.

Our group of seven made the trek out to the northern outskirts of Brisbane for the last of this year’s Federal Government Community Cabinet meetings – knowing that as Climate Change Minister Combet was headed to Cancun, Mexico it was a crucial time for us to be reinforcing the call from everyday Australians for us to champion establishment of a global climate fund.

And while only one of us with a climate question managed to get the Prime Minister’s attention in the public forum as she worked across a sea of raised hands we felt satisfied that we were able to demonstrate to Cabinet members that our country’s international responsibilities occupy the concerns of their constituency as well as the more local and domestic topics they might expect to encounter in these sorts of gatherings. Fortunately another two of our group secured one of the post-forum 10 minute timeslots with Minister Combet’s representative, Parliamentary Secretary Mark Dreyfus – read about Jessie’s experience here.

For Emma, who got to ask her local MP and Treasurer Wayne Swan if he supported a Robin Hood Tax, the experience reinforced to her that it’s a subject she’ll want to keep in contact with him about:

“I was pleased to be chosen to ask my question and a bit nervous when the microphone was in my hand. I asked if the Government would commit to implementing the Robin Hood Tax. I couldn’t believe it when he replied that he didn’t know about the Robin Hood Tax! (better known to those in the business, finance and policy world as a Financial Transactions Tax). We have our work cut out, but don’t worry, Mr Swan will be getting a letter from me telling him all about it.

The weekend then saw us hosting a ‘meet and greet’ with Shadow Parliamentary Secretary for International Development Assistance, Teresa Gambaro, at Oxfam’s Fair Trade & Climate Action Hub at Brisbane’s annual Fair Trade Christmas Markets. Market goers and supporters again took the chance to speak up on climate action, urging Ms Gambaro to put their calls to Government for supporting a global adaptation fund as well as cutting our country’s greenhouse gas emissions and ramping up investment in renewable energy like solar and wind.

Ms Gambaro was presented with a pack of materials on fair trade and the impacts of climate change on poor communities already struggling to maintain their livelihoods. She told supporters she had already raised with members of the current Independent Review of Aid Effectiveness panel concerns of the campaign that funding for climate change adaptation should be additional to Australia’s aid budget.

Now we’re gearing up for another chance to meet and hear first hand from Pacific climate activist Ursula Rakova – this time about her experiences at the UN climate talks this week in Cancun, Mexico. It will be the second visit to Brisbane this year from this inspiring and tireless CEO of Tulele Peisa, the non-government organisation set up to oversee the relocation and resettlement of people from the Carteret Islands to mainland Bougainville due to rising seas.

Ursula will be guest speaker at Climate Change, the UNFCCC and the Carteret Islands: A Rooftop Evening on Friday December 17, from 6-8pm.

It will be a great chance for Brisbaneites to show their support – and help raise funds towards the hard work of Ursula and her colleagues. If the past couple of weeks’ activity is anything to go by – we’ll be in for another successful night.