Campaigning for change article written on the 08 Nov 2011 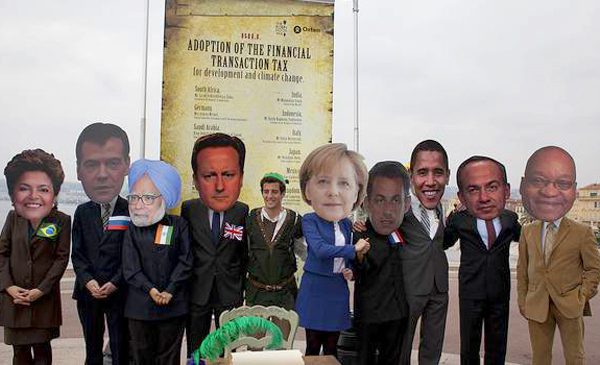 It’s amazing how developments unfold little by little at the G20 Summit. Here, it’s all about details. Each step towards progress is tiny, but it’s there and that is enough to be reassured of forward momentum on smart, sustainable solutions for the world’s poor.

One of our main visions this week was to see a pioneer group of nations to agree to implement aFinancial Transactions Tax to and to use at least part of the revenues to finance development and climate change adaptation programs. We saw France, Germany, Brazil, Argentina, Ethiopia, South Africa, the African Union and the European Commission join a coalition willing to adopt an FTT. There was even talk of Obama being “understanding” of a tax on financial transactions, and other ways to have the financial industry help fix the financial crisis. Despite the official agenda being almost completely knocked over by Greece, the FTT was still a strong enough issue that it remained standing. This was no doubt due in part to Bill Gates’ report that put development back in the spotlight with smart new solutions.

The G20’s feedback on a fair carbon charge on international shipping was vague, and we expect to take this measure with us to Durban, Rio, and Mexico at next year’s G20. “Innovative Finance” is a common priority between the G20 and Oxfam, and it seems that several G20 leaders have turned a new page, making it clear that they are open and receptive to new solution.

In addition to proposing new solutions, we also addressed the systematic flaws that don’t control volatile food prices. At the G20 we were specifically focused on curbing excessive speculationthrough greater transparency and regulation. This would reign in food price shocks that pushed 44 million people below the poverty line in 2010. The G20 has been able to make some effort in launching initiatives to increase transparency on volatility and to act on the damage done, but has taken no step to curb biofuels production, better manage food prices through food reserves nor limit excessive speculation on food markets.

One final interesting development has been a signing of a G20 Tax Convention that attempts to addresses tax havens, but still leaves many loopholes for secrecy. Each year, poor countries miss out on 125 billion Euros in tax revenue due to corporate tax dodging, and we must do more to ensure transparency between governments and opaque structures.

We were ambitious going into Cannes, and the G20 was unable to deliver on some of our expectations, but the strongest survived.