Following on her earlier post, ChangeCourse program development volunteer Bonnie Hook reports back on how things are progressing in Kinglake.

To say the dynamic of the ChangeCourse group has doubled in excitement, energy, and enthusiasm is an understatement. Sixteen more participants flew into Melbourne on Sunday, all from larger cities (though some had travelled long distances to board their flights).

The different personality traits between participants from the cities and those from remote communities were immediately noticeable. Once assembled in the Oxfam offices, friendships quickly developed and the larger personalities identified. We were all wrapped in the arms of Melbourne participant, Cyril Johnson, and made to feel as though we were old friends through the kindness (and frequency) of his beautiful hugs.

The bus to Kinglake lacked air-conditioning which challenged our participants from the north of Australia. When the radiator broke during our journey, we all hoped it wasn’t an omen for the week, but simply the first test of character.

Getting down to business

Kinglake Ranges Wilderness Camp is a beautiful retreat 50 minutes out of Melbourne. As Peter Nathan explains, it’s the perfect setting for ChangeCourse, having faced adversity in the Black Saturday fires, and showed resilience in its existence and reformation today.

Most participants struggled out of bed the first two days, some missing the 7:30 breakfast call and all realizing just how much was going to be asked of them throughout the week. It was straight into activities with Karrina Nolan and Toby Adams facilitating an intense day of workshops requiring thought processes around hot topics such as leadership and change. Confidence was rising and friendships were forming, but even more noticeable was everyone’s astonishment and bewilderment at how much drive and passion these 27 young adults encompassed. As mentor Deeana Kennedy put it, we were all, “constantly learning young people have the capacity to take on so much.”

When discussing leadership, groups focused on the importance of good role models, working towards a goal to better the community’s access to resources and opportunities, and influencing everyone in a positive way. Participants are all brimming with these qualities, and recognised that “more engagement between the youth and the adults” was the action required for “positive change to the future generations” (Waylene Currie). The development of their individual programs for their own communities over the remainder of ChangeCourse will reflect these approaches to engagement.

Participants’ opinions and outlooks are a diverse and honest representation of Indigenous youth throughout Australia. For Skye Clayton, the path to recognition was initiated when Kevin Rudd took “ownership of the situation by saying sorry” to their people. And for all of them, the importance of being listened to is most fundamental: “If we’re not listened to then we’re going to stop caring” explains Talia Lloyd. If these youth stop caring, the likelihood they’ll make positive changes to their communities decreases.

The afternoon saw participants competing in groups to lobby the Australian Government on issues which challenge Indigenous communities. They came alive and worked together to initiate programs which not only solved the problems, but dealt with the causes.

A leap of faith

Exhausted and elated after two days of highly informative sessions, it was time for The Leap of Faith. Waylene Currie led the group, bravely followed by Nathan Kropinyeri, in a test of trust and faith in the relationships they had created so rapidly over the past few days. Challenging themselves and facing their fears, participants climbed a 10-metre pole and jumped off — their safety in the hands of the eight ballayers below. 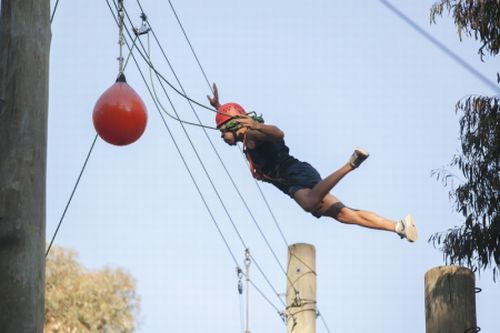 It was an incredibly powerful experience for everyone, and deadly to see so much support amongst the group for everyone who chose to climb the pole, and declare their fears at the top.

The mood is energising and the morale invigorating, and the next few days will be a privilege to be involved in. So far this has been a unique, unforgettable experience for everyone taking part in the ChangeCourse journey.