Want to help stamp out violence against women? Acknowledge that gender inequality is the problem.

Caption: At the age of 18, Ruth was a survivor of physical abuse. Thanks to organisations like Lifeline in Port Moresby, Ruth can feel safe and reclaim her self-confidence. Photo: Rodney Dekker/OxfamAUS

When you’re working to stamp out poverty, gender matters. Why?

Because discrimination and injustice are major causes of poverty worldwide. And if you’re a woman or a girl, you’re more likely to bear the brunt of it.

In some societies, women are denied an education; a move that can deny them the right to be financially independent without a partner or a family to support them.

In others, women are systematically and deliberately excluded from positions of power and authority; a process that will leave women with no say in the decisions that affect their lives.

And all around the world — including here in Australia — women and girls experience appalling levels of violence, including physical abuse and sexual assault.

It’s estimated that 35% of women worldwide have experienced either physical and/or sexual intimate partner violence or sexual violence by a non-partner at some point in their lives (WHO 2016).

For women, the repercussions of discrimination and violence are broad. There are devastating health and social effects — and from our work in the field — we know that gender inequality plays a central role in poverty.

Sadly, just as gender inequality underpins violence against women, poverty can exacerbate it.  We must acknowledge the particular role that gender plays in poverty so we make a long-lasting difference — not just for women, but for everyone.

That why it’s essential that women and men benefit equally from our work. All of Oxfam’s projects are designed to ensure both women and men enjoy equal rights, opportunities and outcomes.

We share the stories of five incredible women who have taken steps to heal, grow and change the future for others.

Rokeya (centre) was only 12 years old at the time of her marriage; her husband was almost 30. Every night, her husband physically tortured and beat her and, from the age of 12, she experienced marital rape. “I was not more than a sexual object to my husband,” Rokeya says. “Every day I was beaten by him and treated like an animal.”

After becoming a member of a women’s club and participating in Oxfam’s Let Her Decide and Participate project, Rokeya gradually increased her inner strength and became self confident. She left her husband and is now self-reliant, earning an income through embroidery work. Rokeya is known as a change-maker in her community and helps to gather women to take a collective stand to reduce and prevent violence against women. 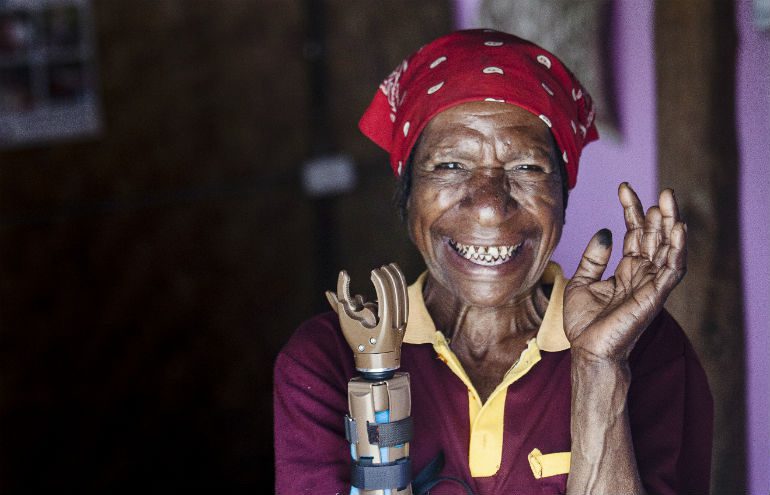 “It was broad daylight when the young men came and they put a rope around my neck and dragged me, and one of them came with a bush knife … there were men kicking me, punching me, cutting me.”

Oxfam works with local organisations to improve crisis support services and advocate for legislative and policy change, while also working to men and boys to challenge and change beliefs that perpetuate violence against women. Mama Rasta was helped by Oxfam partner, Voice for Change.

“I was not able to live with all these problems,” Mama Rasta says. “But now with coming out and sharing, and able to get the support, I am really happy.

“With the loss of my right hand, it was really difficult. But the support from this organisation really helped me. For counselling purposes, and also, because I got the [prosthetic] hand.”

Click here to learn more about what we are doing to end violence against women and girls in PNG.

When Sudha (centre) was 19, she married the man she loved. Against tradition, she was wed without a dowry — a move that endangered her life. “The in-laws found this plan out, and my father-in-law waited for us outside the court where we went to register our marriage. From there he took us back to our neighbourhood (we used to live in the same area) and tried to kill me.”

Although the community intervened, the marriage wasn’t to last. Heavily pregnant and with little support, Sudha found solace in an organisation helping women facing violence. In 2003, she was referred to Humsafar, a support centre that directly supports women affected by gender-based violence.

Oxfam has supported the centre to provide women with counselling, referrals, information, and legal assistance. Sudha now works as a Community Mobiliser to help other women.

“Now I am free and I am happy. I live my life on my own conditions and on my own choices. I’m very happy because I have given space and freedom to my child. If I had lived in that family, I would not have had this opportunity. Whenever I give any kind of support or guidance or help to the women that are facing similar challenges to mine, I feel very proud. At least I have the opportunity to provide women with support.”

Sischa says she was “lucky to be raised in equality” in Indonesia. As a result, she wanted to do more for women, including her own mother, who was currently experiencing domestic violence by other family members. “My mother was very unjustly raised, but was able to raise me with fairness. I wanted to share this with my friends.”

As a young change-maker, Sischa joined the We can campaign In Indonesia in 2010. The campaign was adopted from the We Can End Violence against Women initiative started by Oxfam in six South Asia countries: Bangladesh, Pakistan, India, Nepal, Sri Lanka and Afghanistan. She was just one woman in a network of 33,000 people in Indonesia committed to building a social movement to end violence against women.

“I am proud of the changes I have made. My boyfriend was an angry person in the past. Now, he has agreed to become involved and he is a change maker too.”

In 2009, Human Rights Watch estimated that 70–90% of women in Pakistan had experienced some form of abuse in their life. The Raising Her Voice project is Oxfam’s vision that more women in Pakistan will gain power over their lives, stand up to violence, and overcome the barriers that keep them in poverty. “My daughter-in-law was very close to being killed because her family felt she had brought shame on the family. I intervened and we saved her.”

Kausar is the leader of a women’s group in Tando Jam and a participant in an Oxfam-supported project called Raising Her Voice. But she says before she received this training and knowledge, she wouldn’t have been brave enough to stand up for the young girl.

“Raising Her Voice is very helpful to us and it creates awareness,” Kausar says. “We are able to now raise our voice against violence and other things. Domestic violence is being stopped … The men have started working with us. It is very important that we work together to achieve something.

Oxfam works to support women survivors through women-led local organisations — and it’s these women heroes on the ground that create change. Make a general donation to Oxfam and you’ll help provide life-changing programs like these to women across the world.