Madness in Madrid: What did the latest round of UN climate negotiations deliver?

Is the UN conference on climate change doing its job? We reflect on the discussions, lack of outcomes and hope for the future.

COP25 (The Conference of the Parties to the United Nations Framework Convention on Climate Change), the latest round in what is now more than 25 years of global negotiations on responding to the climate crisis, has wrapped up a defining year in the fight for climate justice.

As our climate team reflects below, it has been a year of alarming and growing contrasts: between inaction and what science demands we must do. Between the leadership of our younger generations and the near abdication of responsibility by our government. And between moments of hope and those of paralysing fear at the reality of our climate crisis.

Whatever happens next, we can be sure that 2020 will be a monumental year in the fight for the future of our planet and for communities everywhere.

Here we share four reflections from COP25 in Madrid.

Let’s start with the good news. There was one beacon of hope amongst the madness in Madrid: that the voices of Indigenous peoples were louder than ever before.

Despite centuries of colonisation and structural oppression, Indigenous peoples from Australia to the Pacific to the Amazon continue to fight to protect their land and seas. Today, and despite facing exclusion, silencing and, in many cases, unimaginable risks when challenging authority, Indigenous peoples remain at the forefront of the struggle for climate justice.

COP25 may have ultimately failed in its formal outcome to safeguard the rights of Indigenous peoples. But it must now be obvious to all that the climate crisis is inextricably linked to colonisation, to inequality, to human rights, and to broken economic and social systems. And that only by recognising this legacy and listening to those on the frontlines of this crisis will we find a path to a better future for all of us. Power to the people! 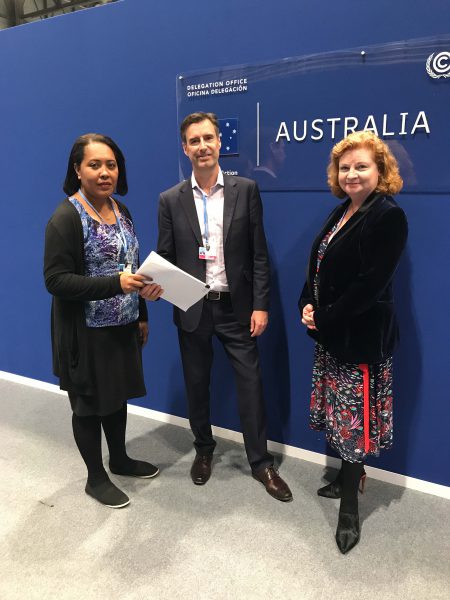 More than 2600 people showed their support of our Pacific neighbours, by signing our petition calling for urgent climate action from our government. The manager of Oxfam’s Pacific Climate program, Ilisapeci Masivesi presented the petition at the UN COP25 climate talks to Jaimie Isbister, the Australian Ambassador of Environment.

Having been inside many previous rounds of negotiations, we know these talks can feel profoundly disconnected from the urgency of the challenge we face. And this year was no exception.

Things that should be no brainers – such as agreement on the need for countries to strengthen their emissions reduction targets, or agreement that action on climate change should uphold human rights and the rights of Indigenous peoples – were fought over endlessly, even as large swathes of the planet went up in flames.

As we’ve lamented before, hedging our hopes solely on these protracted negotiations could lead to despair. Thankfully, and as we’ve said of our own situation in Australia, many communities, businesses, local governments and other actors are getting on with the job and not waiting for international agreements or their own governments to give them a nudge.

So why do these talks still matter? And why does Oxfam still show up?

To hold governments and corporations to account and to build the future we want.

The Paris Agreement was a beacon of hope for vulnerable communities around the world.  It committed all countries to working to limit global heating to 1.5°C, as well as mobilising the funding and support needed for communities to adapt to the impacts they are facing and recover from losses. Successive rounds of negotiations since have been about devising the many rules and guidelines for implementing the Paris Agreement and, at the same time, ensuring countries’ ratchet up their own commitments in line with what the Agreement demands. And it’s here that progress has been painfully slow.

As talks have ground on, it’s become clear that the Paris Agreement alone won’t save us. That we must use every tool at our disposal, from the local to the global to help save the planet. But the Paris Agreement remains an essential part of this toolkit. Particularly in ensuring that no-one is left behind, in sharing effort between countries, in pulling laggards in to line, and in ensuring protections for those on the frontlines of this crisis.

3. Will Australia ever start using its powers for good?

How often had you groaned as our politicians trot out the line that Australia is only responsible for 1.3% of global emissions? Truth is, Australia’s emissions per person are the highest in the developed world.

Australia is a major polluter in global terms. We are the 14th largest and our total emissions are higher than 40 countries with bigger populations. That’s before accounting for the emissions that stem from our coal and gas exports, which are more than double the size of Australia’s domestic emissions. If all countries followed our lead, the world would be careering even faster towards catastrophe.

Sadly COP25 showed us again that Australia’s woeful inaction at home, coupled with its behaviour during international negotiations, is to putting the brakes on international cooperation. Shooting itself and the world at large in the foot.

The Australian Government came to these talks with the sole aim of negotiating a way to do less, rather than in the spirit of fostering greater collaboration and ambition. Specifically, to defend its use of Kyoto ‘carry-over units’ to weaken its already woefully inadequate emissions reduction target.

As one seasoned climate diplomat observed, such trickery inspires a race to the bottom, undermines trust between governments, and encourages others to find their own loopholes and excuses for underperforming.

It doesn’t have to be this way. As Ross Garnaut and others have shown, Australia has not only more to lose than any other developed country through climate impacts, but also the most to gain if it decides to embrace the opportunities of a zero carbon future.

Yes the climate crisis needs global action. So, let’s do all we can to help drive that. Because right now we seem to be doing all we can to slow it down.

When it came to the formal agenda of this COP25, governments had a relatively small number of things to reach agreement on compared to previous COPs. One critical piece, already postponed from COP24 in Katowice, was to finalize the rules for carbon markets and the global trade in emissions reductions (Article 6 the Paris Agreement) which govern some of the activities that countries can carry out in pursuit of their Paris commitments.

We have already seen some countries disregard human rights in the name of climate solutions, for example by displacing local communities from their land on the false pretence that it is necessary to sequester carbon from the atmosphere.

At Oxfam we know that the very opposite – the path of promoting traditional knowledge, ensuring secure land tenure, and upholding the rights of Indigenous peoples – is an essential part of the world’s response to climate change.

Nonetheless, governments failed to agree that the rules for Article 6 must include protecting human rights and the rights of Indigenous peoples, and this final piece of the ‘Paris rulebook’ was kicked to COP26. Unsurprisingly, the villain here was Brazil. Under far-right leader Jair Bolsonaro, Brazil has gone rapidly from a country widely praised for emissions reductions over the last decade to a hotbed of climate destruction, where three Indigenous leaders were murdered in the last week alone.

COP26, as the deadline for all countries to strengthen their contributions to the Paris Agreement, is already shaping up to be a massively important moment, and is being billed by many as the world’s last chance to get itself on track to avoiding a climate catastrophe.

All that said, sometimes no deal is better than a bad deal. The Australian Government had hoped that the Article 6 negotiations would green light its controversial use of Kyoto “carry-over units”. We now have another year to make sure that doesn’t happen. Together we can keep the pressure on the Australian Government to take stronger action on climate change. Show your commitment to stopping climate damage, ending poverty, and building a brighter future for all.
Sign the pledge