“The day we will dance”: Voices of women in the midst of conflicts in West and Central Africa

The music stopped in the heart of the desert, the savannahs and forests of the Sahel and the Central African Republic, taking with it the joy of better days. Whether in Mali, Niger, Burkina Faso or the Central African Republic, fear has spread across the region, and people are facing it at two fronts: firstly, where armed groups devastate villages, driving more than 5 million people to flee their homes in the region. Secondly – and more recent – the rise of coronavirus, which has so far affected 5,420 people and left 219 dead, fueling uncertainty amongst the population of these four countries.

For the majority of displaced women, their dance partners have also disappeared. Many men of working age have been killed by armed groups, disappeared or left in search of a better future. Women find themselves in extremely precarious situations, struggling for their survival and for those depending on them. Many bear the scars – visible and invisible – of an act of violence, of rape.

We went to meet them. Displaced, survivors, heroines, they are hundreds of thousands awaiting for music to resume in their lives. Whilst they do not sing, they still have their voices. To tell their story. And hope, to imagine another future. “My children are my hope because they are the source of my life.”

“My name is Victorine. I come from the Center-North of Burkina, from the village of Dablo. Before, I used to make a traditional millet beer as part of a women’s association. It allowed me to support my whole family. I have been the head of my large family since the death of my husband.

The first time that gunmen attacked my village, I lost two of my brothers and my nephew. The second time, I was forced to flee like others had done before me. I left with only the clothes that I was wearing; today I am left with nothing.

“The shootings, we were able to flee. But a disease that the wind can bring is very hard.”
– Victorine, Burkina Faso

We are hosted, like so many others, by a local family. There’s a huge lack of food, I can’t eat every day, and without help I would not make it.

We have been told about coronavirus. It doubled our fear. We can no longer gather for food distributions. We’re asked to wait for a phone call, but this is very slow. I’ve started to collect gravel, and I sell the heaps of gravel in order to feed my family. My children count on me.

The most difficult thing here is water – we urgently need it. When I get 10 cans of water, they don’t last the day; it’s hot, we have to wash, drink and clean. 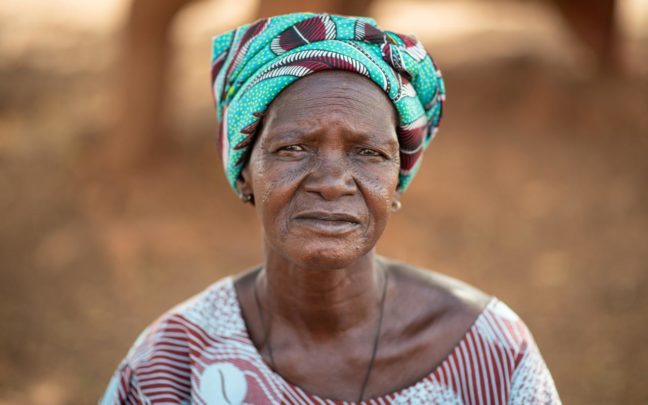 If the disease ends and the attacks end, there will be peace. As a woman, I teach my daughters-in-law, my children, my grandchildren, so that they cultivate peace and social cohesion. I would have liked to have been an outreach worker. I would go around to educate young people, and women on the importance of peace.

In the future, I see myself surrounded by my children. They will have succeeded in school, they will take me on trips to visit other countries, and I will breathe the air of peace. My children are my hope because they are the source of my life. And with them I will be happy.” 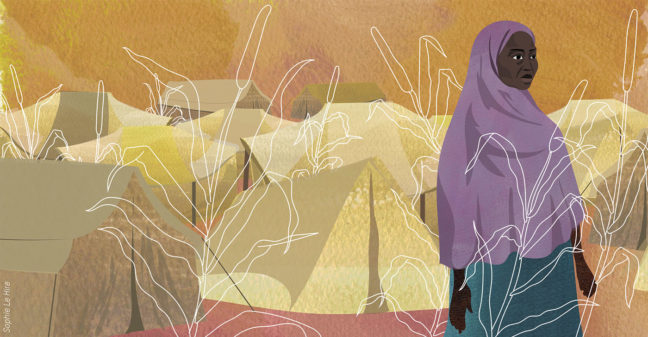 “For fear of being massacred, we ran away in the middle of the night, taking our children with us.”

My name is Halima, I am married and I come from Niger. I gave birth to seven children, three died, I now have four. After the horrific attack by Chinagoder (January 9, 2020), the military camp in Tiliwa, my hometown, was moved to Ouallam, in Western Niger. Seizing this opportunity, armed men ordered us, the population of Tiliwa, to leave our village immediately or there would be reprisals, after also having beaten a young villager with a horsewhip.

“Pregnant women kept falling and getting up. We have lost sight of our children. The wives and their husbands have gone separate ways.”
– Halima, Niger

For fear of being massacred, we ran away in the middle of the night, taking our children with us. Stressed and tired from walking, pregnant women gave birth on the way in extremely precarious situations. In the absence of a doctor to cut their cords, the newborns had to be wrapped in cloth before being taken care of.

In Ouallam, the IDP site was already overcrowded. At the very beginning, we regularly received help. But the latrines are in very bad condition and they overflow with excrement, while animals have access to them, which exposes us to the risk of severe diseases. We are crowded ten or twenty people together per tent and our stocks of food are almost exhausted.

When we were at home in Tiliwa, we lived well and the women were very active, we cultivated our gardens, and had our small businesses. Today we are forced to sell the bean leaves for pasture, pound cereals or sell charcoal to have at least 100 francs ($ 0.17) and buy us gari**. We are forced to live in misery because our men don’t have any money.”

“At the beginning, I did not manage but together with the other women, it became possible.”

My name is Tedy, I am 40 years old, I am Malian, native of the region of Mopti in the Center of Mali. Because of the violence, I had to flee my village, and I live today with other displaced people who have known the same fate, on a site near the capital.

Before the conflict, I was selling milk and I was also a hairdresser. I took care of my family and even managed to save money. But one day, as intercommunal violence became more and more serious, I was forced to flee, to leave our house with my children, taking only my phone and the clothes I was wearing.

“I want my children to get an education worthy of the name, to be one day part of the elite in this country.”
– Tedy, Mali

Shortly after arriving at the site, I was appointed President of the displaced women because I speak the national Bambara language, so I can easily speak to the authorities. With the other women, we decided to develop activities to earn a living. I got the necessary support so that we are trained in making soaps and dyes, as well as in practice of traditional henna and hairdressing.

In Bamako, there are really a lot of weddings and we thus had the opportunity to put into practice what we had learned with our first clients. Like others, I am a mother and I take care of my children alone. At the beginning I had started a small condiment business, it worked a little, but alone and with my children to take care of, I did not manage and I had to give up. Together with the other women, it became possible. I can’t imagine the future. We would like to return home, but the conflict persists and we are afraid of endangering the lives of our children. I haven’t had a chance to study and the struggle of my life is to send my children to school. It is for them that every day I find the courage to fight and to encourage other women to do it too. We have a duty to guide our children on the path to a better future. In my dreams, this path is education and I will continue to believe in it and hope for it.” 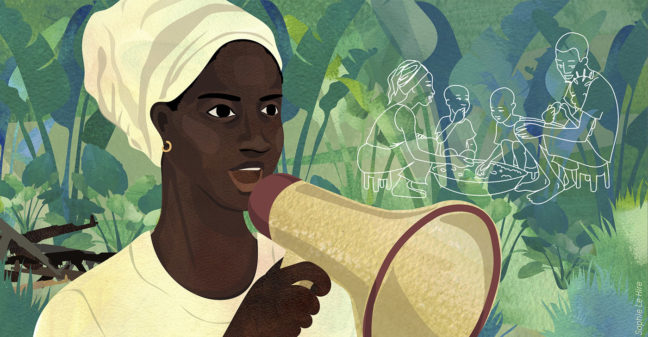 “I joined the community protection committee because I wanted to support the victims.”

“My name is Sylvie, I am 31 years old. I live with my husband and five children (two girls and three boys) in my neighborhood in Batangafo, not far from the site of the displaced people where we lived for a year. The past few years of conflict have left little infrastructure and many people displaced.

When armed groups burned my house in November 2017, I lost everything. At the IDP site, I saw women and girls scared to fetch water or go to the fields for fear of being assaulted or raped on the way.

“Armed groups choose their target. If the coronavirus comes to Batangafo, it will destroy everything that remains on its path.”
– Sylvie, Central African Republic

Most of the cases are rapes, accusations of witchcraft on old mamas, or young boys tortured by armed groups. We refer them to the hospital, follow up and make sure they are not stigmatized. One day, my little brother came home with Aimé *, a 26 year old boy. I knew he was in one of the armed groups, so I started talking to him. He took up arms in revenge after his parents were killed by armed groups. Three years later, when he was out of the bush, I helped him realize that even his five younger siblings were afraid of him. It made him sad, and he didn’t want to die in a fight like some of his friends. He therefore laid down his arms and continues to come every week to the awareness sessions of the community protection committee. I hope it will serve as an example to other young fighters who are reluctant to return to the city.”

* Name has been changed to protect identity
** Gari is a cassava flour that is used in many dishes in West Africa.

Oxfam’s in the Sahel and Central African Republic

Oxfam and its local partners provide humanitarian aid to more than 400,000 internally displaced people (IDPs) and host communities in the region, in terms of food aid, access to water, hygiene and sanitation and to protect the most vulnerable, especially women and girls. Oxfam also works alongside communities in conflict transformation programs to foster cross-border dialogue.