Blogs, Educating for change article written on the 09 Feb 2015 Hunger Banquets. They’re not dystopian fights to the death a la The Hunger Games – they’re school events held across Australia in Term 4 to give students a taste for the fact that global hunger  isn’t really a game.

Can you believe that in 2015, 1 in 9 people still go to bed hungry every night? The Food and Agriculture Organisation of the UN (FAO) have reported that global hunger is slowly easing – but that’s still 805 million people. And it’s not because there isn’t enough — the world produces enough food to feed everyone on the planet.

So as part of Eat Local Feed Global 2014, almost a hundred schools around the nation set out to understand what is causing global hunger, and experience a lunch they’d never forget. Here’s the idea — a school holds a lunchtime banquet, but there’s a special catch.

Guests are assigned to high, middle, or low income groups, which are modelled on global poverty statistics, and then served a delicious (or otherwise) lunch accordingly. Hunger Banquets are a creative way to drive home the realities of global food inequality, which can sometimes seem an unfathomable or distant problem to students. But enough from us. We’ll let the students do the talking. Here’s the report from Lyndhurst Secondary College’s Year 9 students on their impressive event:

“We invited other Year 9 students and staff at the school to come and experience what it is like for people around the world who don’t have equal amounts of food to eat.

“As guests arrived at the restaurant they chose a ticket at random and gave a gold coin donation. The green tickets meant the person was representing 15% of the population that are high income earners. They received a meal of pasta, salad and apple juice.

“The yellow tickets meant the person was representing 35% of the population that are middle income earners. They received a sandwich and water.

“The red tickets meant that the person was representing 50% of the population that are low income earners. They received rice, lettuce and water.

“We gave a speech about food insecurity and climate change and played the Oxfam DVD about how Eat Local Feed Global helps people around the world who are experiencing food insecurity.

“In the lead up to the event we learned how to cook the meals, how to serve food and how people around the world don’t have equal access to food.

“The Hunger Banquet helped us learn about serving others. It was fun helping raise money for less fortunate people around the world.” The students held their banquets as part of their involvement in the Advance Schools Program. As well as a memorable active learning experience, they raised valuable awareness in their community about global hunger and fund raised to help support Oxfam’s life changing work with farmers and communities in The Philippines, Timor-Leste, Indonesia and Vanuatu. 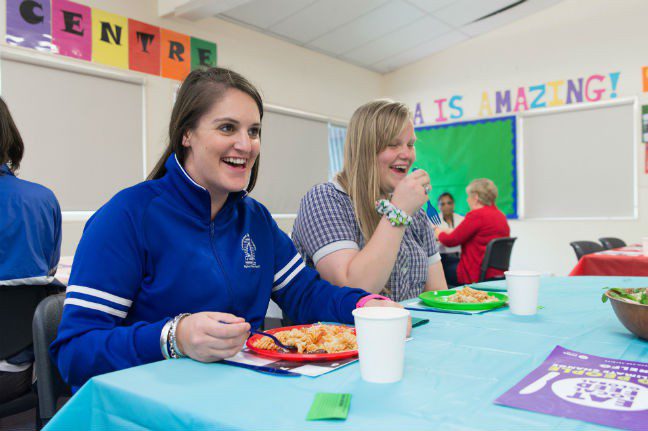 Thanks to Lyndhurst Secondary College, all the students who participated in Food Glorious Food and the Hunger Banquets, and teachers Hayley Seadon, Jason O’Malley and Catherine Blackburne for your great work, and help with this blog post!