Campaigning for change article written on the 14 Sep 2010 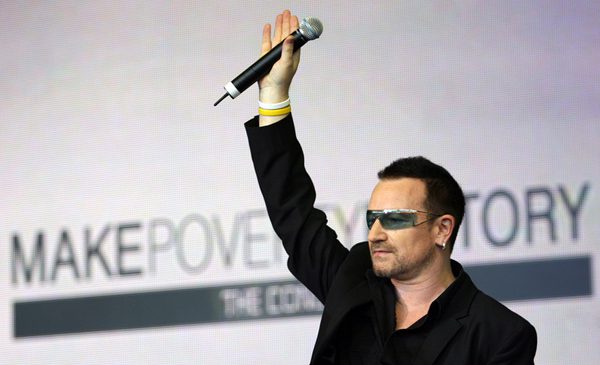 Bono from U2 campaigning to Make Poverty History

Duncan Green, Head of Research for Oxfam GB and author of ‘From Poverty to Power’ comments on the differences between the climate change campaign and Make Poverty History.

Over on the Political Climate blog, Andrew Pendleton has been musing on the difference between the 2005 ‘make poverty history’ and ‘stop climate chaos’ campaigns. In his view the climate campaigners have failed to break out of the ‘green wedge’ of environmentalists, whereas MPH went mainstream. His explanation for the differences?

MPH used one simple and shocking stat – a child dies unnecessarily every three seconds – to devastating effect, whereas the climate debate is a contested statistical porridge of percentages, parts per million and projected temperature rises.

“The solutions to climate change are complex, costly and will have a direct impact on the lives of those whom campaign groups need to engage to be successful – i.e. the public in the rich world….. especially in comparison with the links between increasing aid or cutting debts and poverty reduction (even if in reality one does not necessarily beget the other).”

“MPH emerged from the Jubilee 2000 campaign, which meant development campaign groups had experience of working together; the environmental campaigning sector is apparently less cohesive.”

“The axioms of popular campaigning usually require there to be a clear victim, a clear villain and a clear solution. We might need to tamper with these for successful climate campaigning. Apparently future generations are too distant as victim and government-set emissions caps and lifestyle changes are not cohesive and appealing enough as solutions. However, the biggest problem is that, much as we can point the finger at big oil, or lambast weak political leadership, climate change is a bugger of a campaign issue because the utlimate villain is…..us.”

Interesting, but actually, I think he’s being too kind on MPH, and too hard on the climate change campaign. At least in its topline messaging, MPH reduced a massive challenge (development) to a simple question of cash (the trade reform bit never really got anywhere). In my view, and as Andrew notes in passing, that seriously misrepresented the nature of development, hence the focus in From Poverty to Power on the central role of active citizens and effective states in developing countries. But it made for a great campaign. Political leaders are (or were) always happier to sign a cheque, (or at least promise to put one in the post) than to try and undertake difficult and traumatic systemic change at home. And such systemic change – in technology, energy, transport, land use and even our understanding of growth, prosperity and well-being – is unavoidable if we are to tackle climate change. The climate change campaign is simply orders of magnitude more ambitious than MPH.

Other differences? MPH took place in a global economic boom; the climate campaign in a slump. MPH’s target was ‘eight men in a room’ at Gleneagles, while tackling climate change needs action and agreement from the milling hordes of leaders from all countries, or at least many more of them. MPH was perhaps the last gasp of a crude North-South view of the world, and so fitted easily with the political rhetoric of both developed and developing countries, whereas climate science and the hard fact of carbon emissions demand an entirely new geopolitics that is proving hard to construct.