When earthquakes devastated Nepal in 2015, thousands of lives were lost, homes were reduced to rubble and livelihoods were shattered.

In the wake of the disaster, people from across Australia joined forces with Oxfam to extend a helping hand to those affected. Til (pictured) is one of those people.

Til is a 60-year-old woman from Sindhupalchowk, Nepal. Without the generosity of Oxfam supporters, her family might still be homeless and drinking contaminated ground water.

“I don’t know what to say to people that far away in Australia,” Til says.

Thanks to the generous people who “saw with their hearts” when tragedy rained down on Nepal, we’ve reached more than 587,000 earthquake survivors with building supplies, livelihood support, vital clean water and hygienic sanitation to prevent life-threatening waterborne disease.

Water had always been scarce in Til’s village, long before the earthquakes. As a young mother, she would traipse to a distant water source to fill heavy pots with water for her family.

Eventually, Til’s community constructed a tap and water tank, closer to the village. Though it barely supplied enough water for everyone in the village, it was an improvement.

When tragedy struck in 2015, the water source was ruined.

Til explains, “After the earthquake, all the water went underground … whatever little water would seep through, we would collect it.”

“That was how we were managing, and then people from Oxfam came and provided some support,” she recalls.

“Oxfam gave us materials and then we could bring the tap nearby — after that, it has become comfortable and it is good.”

For Til, clean water has been a life-changing gift.

She says, “It has made a huge difference. An old couple like us need only a kettle of water for cooking, which I can easily bring from this tap now.”

“Also, I can join the pipe and take water directly for the buffaloes to drink. It’s so good now.”

“If it was not fixed, we would have faced a hard time. We would not have had enough water. Having this is like a godsend for us women … it’s us who need water.”

Women bear the full burden of domestic work in Nepal, including growing food, finding firewood and hauling water. In poor and remote communities, women can spend up to 14 hours each day hauling heavy loads of water.

In these communities, many families have no choice but to drink dangerous, contaminated water. This makes children susceptible to frequent bouts of diarrhoea due to waterborne disease — for many, it can be life-threatening.

Will you join forces with us to help tackle poverty in Nepal? It’s time to “see with our hearts”. 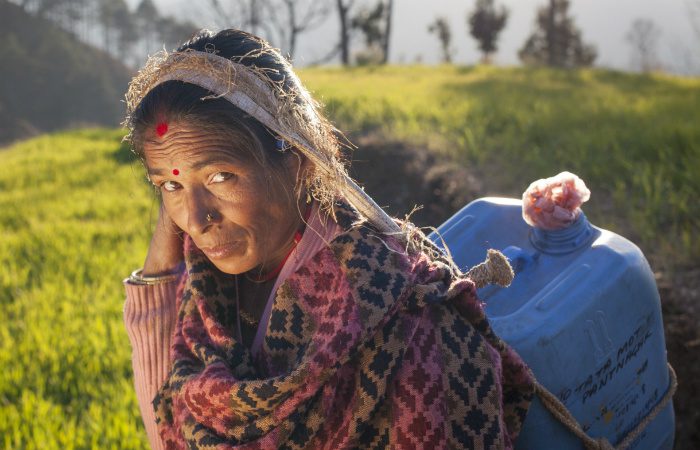 Donate to help give clean water in Nepal

Your donation is essential to help Oxfam provide vital clean water to families in Nepal.

← Foreign aid: Australia must match the generosity of those we’re helping
A lifetime spent searching for clean water →
×