Together, we can help stop hunger.

Give Once Monthly
Choose your impact

In East Africa, conflicts have forced millions of people into extreme hunger. The climate crisis is now exacerbating an already dire situation. We are in the middle of a human-induced and entirely preventable disaster.

These people are the innocent casualties of the climate crisis and they are slipping deeper into poverty through no fault of their own.

Millions of people are facing extreme hunger. They need your help.

Mareya stands among the carcasses of her livestock. Of the 50 animals she owned, only seven remain.

“There was grass, there were no diseases, and people and animals were healthy. Now there is a drought. The town is suffering. The drought has wiped out livestock… Children are all malnourished, elderly people are the same… It is not their age, but hunger.”
– Mareya, Kenya

Sankuus’s crops failed due to drought cause by extreme weather. His wife had to walk hours each day to get water, until one day, she tragically died on the way to the river.

“The wells have dried up. The camels are unable to stand on their feet… The women go as far as 7km to fetch water on their back. The women come home in bad condition… We fear another death.”
– Sankuus, Kenya

At age 20, Hafsa carries a heavy load in her hands and her heart. The drought forced her family to seek help at a camp for displaced people.

“I came 10 days ago from my village. My husband took me and the two children to this camp. I have two children, my daughter is one year and a half, my son is five years old… We used to have more than 150 goats, all of them but two have died because of the drought.”
–Hafsa, Somalia

Your donation can help provide much needed support

This unnatural disaster can’t be met by one person alone. It needs the global village — including you — to work together. Your donation today help provide immediate support for families affected by climate change and drought. Together, we can help provide:

Food for the hungry

Your compassion could help provide clean water and hygiene kits with soap, a jerrycan and water purification tablets to save lives.

Your kindness could help provide climate-resilient seeds, plus tools and training so families can start a drought-resistant farm. Your compassion can help fuel change 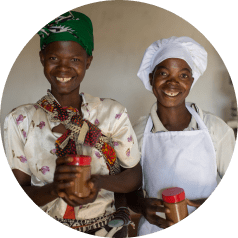 By submitting this form, you agree to receive emails from Oxfam and can unsubscribe at any time. See Oxfam’s Privacy Policy for more information.
×