Campaigning for change article written on the 17 Mar 2011 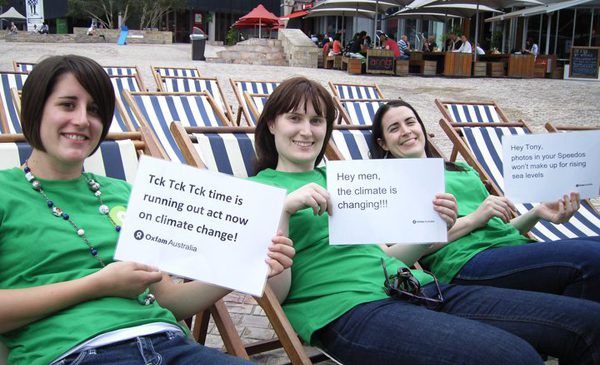 To many, the linkage between poverty and climate change is stark and obvious. It would be easy to imagine how increasingly frequent droughts, floods and cyclones can devastate the lives of the poor who mostly engage in subsistent farming. Indeed, studies show that the worst famines in history have primarily been the result of the consecutive occurrence of extreme weather events, which was statistically rare in the past.

However, a crucial fact that many may be less aware of is that 70% of the world’s poor are women. Effects of climate change would only mire these women further into the cycle of poverty in which they have been trapped due to systematic discrimination in education, health care and economic opportunities. It was with these messages in mind that two fellow volunteers and I campaigned for more action on tackling climate change at Melbourne’s Federation Square on the eve of the 100th anniversary of International Women’s Day.

It was a lazily hot Monday with few passerbies, but we made the most of our opportunities to engage people in several activities. First we approached them with the message of linkage between women, poverty and climate change. That was followed up by asking the interested to sign our petition to the Australian Government for greater actions on tackling climate change. Furthermore, we had these lovely designed postcards for those who would like to directly appeal to the Federal Climate Change Minister. We also took photos of people send messages to Julia Gillard and Tony Abbott about climate change. These activities on the ground were also accompanied by the showing of the Faces of Climate Change short films on the Fed Square big screen. These clips presented powerful imagery of those devastated by climate change in the developing world.

At the end of the day, as much as we looked at the numerous names on the petition sheet with a sense of accomplishment, I especially revelled in engaging people in conversations about women, poverty and climate change on behalf of a highly reputed organisation like Oxfam. Through these often extensive conversations, I was able to use my knowledge about the topic to answer queries and resolve misunderstandings from those curious or less certain. If the people I have spoken to have gained a deeper understanding or passed on the message to people around them, then I would have made a very tangible difference.

Allen Ai Lilun is a volunteer for Oxfam Australia