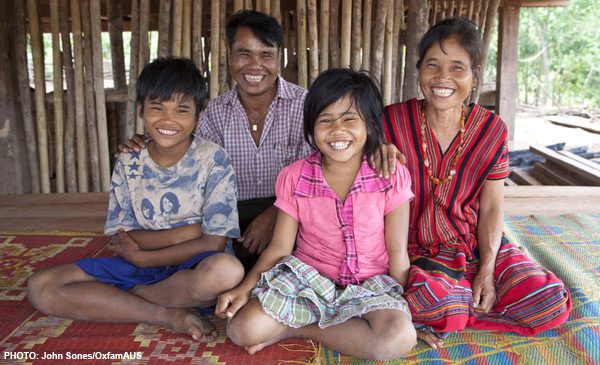 Running water is one of those little things in life that we depend on without really considering. But stop and think for a minute: If you couldn’t turn the on tap, would you even know the location of your nearest water source?

For Bhoomy Deungmarny the answer is the KaPanh River, about 400 metres from her home in Sabong village in the Ta Oy district of Laos. While 400 metres may not seem far, try covering that distance four times a day while carrying 20 litres of water on each return trip.

In 2005 Oxfam supported Bhoomy’s village to install a gravity-fed water pump system, effectively bringing running water to the village. In the following interview Bhoomy talks about the enormous changes this has made in her life.

Hi Bhoomy, can you tell us a little bit about yourself and your family?

Hello, my name is Mrs Bhoomy, my husband is Mr. Thongdam. My family has seven children. Two children go to study in Ban Bong; three children still stay at home.

How old are you?

How long have you lived in this village?

I moved here six years ago

Where did you live before?

Before I lived here in the middle of the village, I lived in the village Sabong Kok Hai. Where I lived was very isolated and was difficult to access. So we moved here to live along the road, to have better access to transportation.

Since moving to this village, what Oxfam activities have you been involved in?

Since I moved here I’ve joined Oxfam in two activities – a gravity fed water system and the rice bank in Thieng Hai village.

Can you describe how you were involved in the water system?

For this activity I participated in the pipeline. They did the construction, they transported construction materials such as cement and steel provided by the project. We contributed sand and labour.

What is the water system? Can you describe the water source, what it does for the village?

The water source is the KaPanh River. From there to the tank, to the head of the system, it is about 300m, from KaPanh River.

How do you get the water up to here?

How does the water get pumped into the tanks?

How did you learn to build this system?

After Oxfam provided the funds, technical staff came from the district – Mr. Phouxay. Once the installation was completed, we received training and instruction. Four people from the village were trained to be responsible for maintenance and repairs, as well as all the villagers who were also involved. We repair it when it is broken.

Who does this training?

So now if you have any problems with the water system, how do you deal with it?

If there is a problem, we fix it ourselves. There are three people assigned to repair it. All villagers are members of the water user group.

Have you had any problems with the systems?

Yesterday we had to fix it because there was a problem with the pump, there was rust and it didn’t flow smoothly. One of the members came to fix it. He fixed its axis, adding the rubber because it didn’t trigger as it should; he tightened the axis with a rubber washer.

What is the importance of this water and who uses it?

This water is very important because everybody uses it. The whole village uses it, not only one person. We use the water for gardening and it reduces our labour carrying water. The water is nearby now so we don’t have to go far. Mostly it is used by women.

Who used to collect water from the river before?

How long did this take women? How often did you have to go?

Before it was about 400m. It took around one hour for every trip because it was heavy.

How many times did you have to go?

To collect the water in a day? Four times.

Is that per person?

How much water? How many buckets each time?

Before we used bottle gourd fruit (to collect water). Now we use a bucket – 10 litres each, and two buckets. Before, when the children were small, there was only myself to collect water.

What problems did you face going to collect the water since it involved four hours per day?

It was heavy to carry two buckets of10 litres. Other problems were leech bites, mosquito bites. There were a lot of mosquitoes. Sometimes, going at night, the centipedes would bite.

Did you suffer sickness or bites from other animals?

Yes, sometime we found other things which were also dangerous. There was also a tiger. Going late at night it was very dangerous and risky.

Did you catch malaria from the mosquitoes?

How did getting malaria impact on the ability to get enough food and look after the family?

How did your family and children survive in this time when you couldn’t support them?

When I was sick it was my husband who looked after everything, because the children were too small. Now the children are mature enough, they look after things together when I am sick

How much time do you spend collecting water now?

Now not more than one hour. We can fill our 10-litre pot in about five seconds!

So now that you save all this time every day, nearly four hours, what do you do with that extra time?

I do other work. I can go to the upland rice field earlier because there is no need to go to collect water anymore; I spend this time planting rice. I also find food, vegetables, catch fish. Also gardening, planting banana tree and sugar cane.

Do you use the water to grow any food?

I use it for gardening, planting vegetables. Before, we didn’t do gardening, but now we do. Now it is comfortable in the dry season. Every year at this time we plant in the upland field and in dry season we do gardening.

What kind of vegetables do you grow?

We grow Chinese cabbage, coriander, parsley and corn. We can also grow eggplant and chilli during the dry season now that we have this water system. We grow all kinds of vegetables, pumpkins too.

Before, did you have problems with not having enough food?

Before in the dry season, we could only find edible bracken and a bit of water clover in another place. It was far, and took us one, two or three hours before we had enough to eat. For example, we had to grow vegetables along the river bank and it would take us several hours walking get the vegetables. Now it’s easier.

So, is there any food shortage now, at any time during the year?

Now there is no food shortage. During the rainy season we have vegetables in the upland rice field. In the dry season we find it from here, in our garden.

And how has your family’s health changed since having enough food to eat?

There are a lot of changes. Our life is good, our health is good, there is no sickness.

In the training I learnt how to protect the water system. I learnt how to implement the system and how to manage both taps. The water pump committee was set up to maintain the system. We have a team committee to collect money every month from each family in the village, 2000 Kip per family. That money is part of a village fund that we save for maintenance.

How well has this system been maintained since it began?

We used it to buy the faucet. Twice we have needed to replace the tap.

Overall, speaking of the water system, for you, what is the best change?

After we installed the water system there were many changes in our village. Collecting and using water is easy and it is easy to grow our garden. As for disease, there’s less sickness since Oxfam gave us water and sanitation training. There are also first aid kits at home to improve our health. Many things have improved – it’s different from the past.

What do you hope for the future for yourself and your family?

In the future we wish to live well. We don’t want to be poor. I want my family to live well, to have good health and no sickness. That is my hope for the future.

If Bhoomy’s story has inspired you to help others gain life-changing access to water, donate now to support our water and sanitation work in Laos and other areas. Every dollar makes a huge difference in the lives of others!