Food & climate change, In the field, Women's rights article written on the 12 Mar 2013 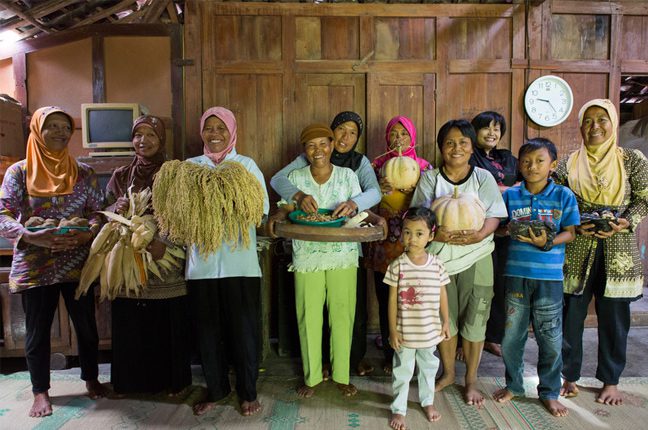 How does a country with almost half the population living on less than $2 per day feed itself? I don’t know yet, but the answer, I suspect, is “not very well”.

It was suggested to me that trying to understand the level of hunger in Indonesia could be difficult as the locals do not always see themselves as hungry if they can scrape together enough money to have a bowl of rice each day. Whether defined as “hunger”, or a “reduced access to food”, neither is good, and something has to be done. Thankfully it is!

I’m in Jakarta to record how access to food is being improved by women small-scale farmers and fishers. (“Fishers” is a bit of an odd term isn’t it? But the alternative, fisherfolk, sounds a wee bit … “folksy” and in a country where women play an integral role in feeding their families, “fishermen” is clearly not accurate — so “fishers” it will have to be.)

I’m here to get some answers from seven women — seven female food heroes (FFH) as they have been dubbed by the Oxfam team in Indonesia. They are Habibah, Jumiati, Mama Rebecca, Suparjiyem, Marlina, Sitti Rahmah and Siti Rofiah. These truly inspiring women are in the Indonesian capital for International Women’s Day to talk about the challenges they face and the successes they have had in increasing food security in their very different parts of this sprawling nation.

To paraphrase a comment from Siti: we are not “heroes” though, or if we are, we are just the seven that happen to be here in Jakarta. There are many more female food heroes dotted throughout Indonesia.

Over the next few days you can get a feel for their stories, and find out what they are doing to promote small-scale food production; but also how they are getting out their message that women are critical to food production and to improving the food security of millions.