Emergencies article written on the 30 Apr 2015 The heartbreaking aftermath of the Nepal earthquake continues. Right now, Oxfam is responding — but the people of Nepal are in dire need of emergency relief.

So far about 5,000 people are reported to have lost their lives. Around 10,000 are injured and a staggering 8 million people have been affected. 1.6 million people in Kathmandu Valley alone are temporarily displaced.

Since the first mammoth 7.8 magnitude earthquake on Saturday — there have been more than 105 aftershocks — some up to 6.7 on the Richter scale.

The situation is critical in rural areas near the epicentre where 90% of the people have lost their homes and livestock, and have no way of getting food. The Government of Nepal has declared a state of emergency in 30 districts and appealed for international humanitarian support.

Oxfam on the ground

Oxfam is on the ground already providing clean water, pit toilets and emergency shelter to survivors in Kathmandu Valley camps.

Oxfam is a leader in providing water and sanitation and is helping assess 12 of the severely affected areas of the country. We are currently working with the Nepal government and other agencies in Nepal to collectively provide water and sanitation as quickly and efficiently as possible to those in need. We’re repairing and fixing existing water sources — as well as installing new pumps and wells.

These measures will provide essential clean drinking water, protect against disease and help save lives. Read more about Oxfam’s response in Nepal. 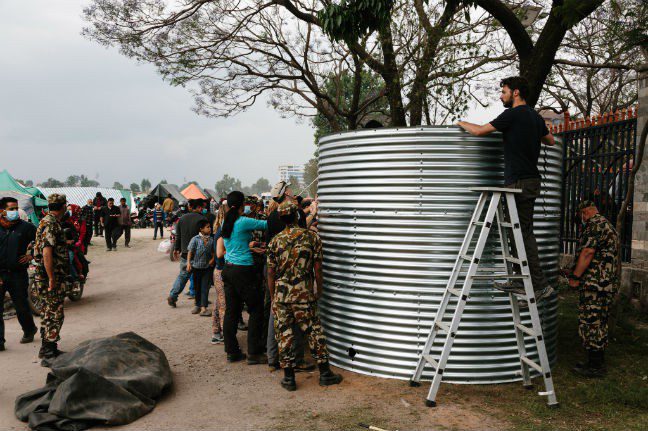 Technical volunteers, trained by Oxfam during the urban risk management program, erect a T11 water tank with a capacity of 11,000 Litres of clean drinking water at the Tundikhel IDP camp in Kathmandu, Nepal. They are assisted by volunteers from Holland, tourists stranded after their flights were cancelled, and members of the Nepali armed forces. Photo: Aubrey Wade. Oxfam volunteer Shekhou Khadka (23) works to off load latrines being delivered to the Tundikhel IDP camp in Kathmandu, Nepal. He is one of 500 volunteers trained to react in the event of an earthquake during the urban risk management program. “I’m sleeping under canvass outside our house but my family are safe. I became a volunteer because I wanted to serve my community. The big challenges that lie ahead: supplying food, water, health care, and the scarcity of food.” Photo: Aubrey Wade.

The scale and cost of the response is still being assessed. But what is clear is that we need to help the people of Nepal now. Nepal is one of the world’s poorest countries and does not have the infrastructure and resources to deal with a crisis of this magnitude.

Before the earthquake, about half of Nepal’s 28 million population lived below the poverty line — around one in three of them in severe poverty. Their ability to cope with a major disaster is crippled by the lack of economic and social infrastructure that people in richer nations take for granted.

Heavy rains have set in and are forecast to continue all week, making life miserable for those camping outdoors and putting people’s health at risk, especially the most vulnerable — children, expectant mothers, the elderly and the injured. The situation is expected to go from bad to worse when torrential monsoon rains begin in late June.

Oxfam is aiming to provide aid to at least 350,000 people but we need your help today to reach as many people as possible, as quickly as possible. People living in temporary tents and shelters made from tarpaulin at the Tundikhel IDP camp in Kathmandu, Nepal, battle heavy afternoon rains. The start of the monsoon season is expected to hamper relief efforts. Photo: Aubrey Wade. Sangita Kafle holds her son *Nabin (3) at the Tundikhel IDP camp in Kathmandu, Nepal: “My husband, my children and I are sharing a tarpaulin with 21 people. We borrowed money to pay for it…we left with nothing.” *name changed. Photo: Aubrey Wade.

You can help deliver lifesaving emergency aid to the people of Nepal. Please give generously today.