Analysis & Opinion, In the field, Inequality, Mining article written on the 28 Jul 2019

The town of Ayanfuri, Ghana and the proximity of the Perseus Mining Gold Mine. Photo: Nana Kofi Acquah/OxfamAUS

From the air Ayanfuri, a small cocoa farming township in central Ghana, looks like it’s being slowly dragged into a huge open-pit gold mine. For the last seven years the Edikan Gold Mine, owned by Australian mining company Perseus, has been clearing family owned cocoa plantations and relocating communities, markets and schools as the mine has continued to grow.

Whilst mining companies like Perseus are extracting precious and finite resources from Ghana, it is unclear if any of the wealth is benefiting the local community and the country as a whole.

In February this year Oxfam Australia visited Ayanfuri with Oxfam Ghana staff and the Africa Centre for Energy Policy to research our new report, Buried Treasure. This report details how Australian mining companies are hiding their wealth and avoiding paying their fair share of taxes in some of the poorest countries on earth, tax revenue that is urgently needed for public services like schools and hospitals.

We estimate that in 2015 Australian mining companies funnelled over $1 billion in profits out of Africa through the use of tax havens. That’s over $300 million that should have been paid in taxes to the governments in the poorest region in the world. Oxfam Australia and Ghana staff meet with community leaders on the state of the local market. Photo: Nana Kofi Acquah/OxfamAUS

In Ayanfuri the impact of the missing money is immediate.

Like many towns across Ghana Ayanfuri is starved of public services and infrastructure like schools, health clinics and sanitation. Lack of access to basic services are trapping people in poverty.

We visited Ayanfuri to meet the community members who are filling this gap themselves and fighting for change. Whether it’s keeping the schools open with limited resources, working overtime in health clinics or advocating for better small business opportunities– the Ayanfuri community carries a responsibility that should be better shared by the government through taxes paid by the mine. And yet, after six years of extracting gold, Perseus hasn’t paid a single dollar of tax to the Government of Ghana. The gold won’t be there forever – once it is all dug up – the community will be left in a state that is likely worse off than before the mine started. Perseus should be paying taxes to the Government of Ghana to allow the government to invest in the future of Ayanfuri. The local market place is the heart of Ayanfuri and the women that work there have watched how the town has changed since the arrival of the gold mine. Afia Dede, who has worked at the market for 26 years told us that 70% of the town are struggling with unemployment and they see little support from the mine or the government. When Perseus relocated a portion of the town and the market for the mine, Afia found herself in substantial debt for the construction of her new home – a responsibility she should not have had to shoulder. These debt repayments keep Afia’s family in poverty even while she tries to grow her business and support her family. The new marketplace isn’t sheltered, despite promises from mine to build a roof over it. Afia told us that in the open the rain regularly spoils their investments. 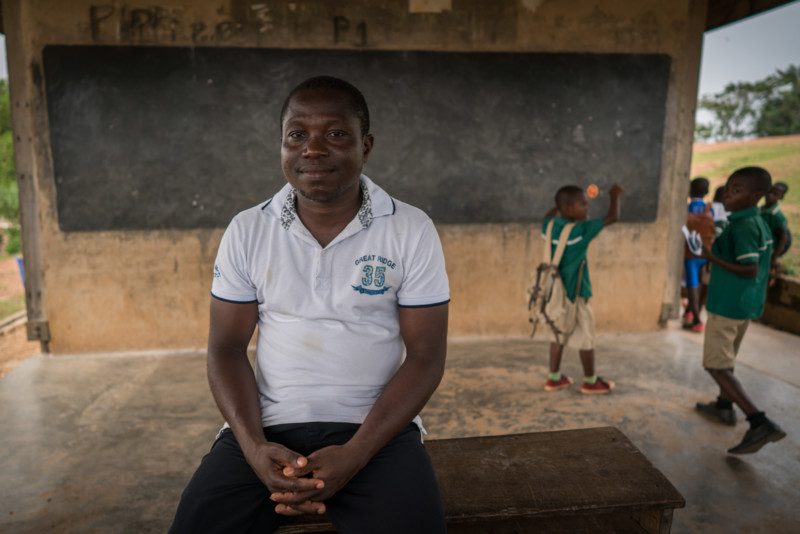 Mr. Job Nyarko, the headmaster of the local school in Ayanfuri, poses in one of the open-air classrooms. Photo: Nana Kofi Acquah/OxfamAUS

At the local school Job Nyarko told us of his dreams to have enough desks, books and other basic resources for his students. The school has more than 600 children – Job told us that each class has 50-plus students working with about 20 textbooks, and up to four students sharing a small bench and table that doesn’t give them enough room to write. These are basic things that the Government of Ghana could better afford if more tax was paid and collected from some of the big mining companies that operate across the nation. Kobe is the head nurse at the Pentecost health Centre, the only medical facility in the community. With only one doctor and a small team of nurses the demand for health outstripped the clinics resources a long time ago. The hospital needs three times the number of staff, Kobe told us. Without an operating theatre or anaesthetist, people are forced to travel long distances to find care. The lack of public transport makes the trip prohibitively expensive and many community members are forced to go untreated.

The squeeze on resources has the biggest impact on women and kids. A lack of medical staff, education opportunities and public transport means many women in Ayanfuri go untreated for a range of pregnancy and birth related complications including ectopic pregnancies, pre-eclampsia and severe complications from home births. The clinic regularly deals with diarrhoea cases, especially in children due to a deterioration in the quality of the local drinking water in the last few years. Water borne sickness keeps kids from school and, as every trip to a private clinic puts further financial pressure on families, the family spirals into further poverty. Tax avoidance is a global problem and no country is immune. Closing tax loopholes that allow multinationals to get away with not paying their fair share of taxes has a real, tangible impact on people’s lives. In Ayanfuri we estimate that the Ghanaian government has lost up to $57 million in tax revenue since the mine started operating in 2012 – enough to pay the salary of 8000 nurses.

When Australian mining companies like Perseus pay taxes it means girls get to stay in school and women get proper prenatal care.