Australia is learning firsthand what our neighbours have suffered for years This summer, my family — like many others across Australia — has been going through an ominous morning routine.

We check the latest fire alerts. Next, we consult the air quality app to determine whether it’s okay for our child to play outside today. Over breakfast, we scroll through the latest updates and analysis on the bushfire crisis, and struggle to come to terms with what we’re seeing unfold — including a possible threat to our drinking water supply. We check in with friends. We hold each other close. We try to calm our anxieties enough to get to work.

We live on Sydney’s northern fringe, in an area that has so far been spared the horrors suffered by so many communities down south. Our precious patch of bush, with its lyrebirds, wallabies, and soaring eucalypts, is still there. We are fortunate, and we can barely imagine what thousands of other Australian families have been through in recent months.

But like the millions of others who have been breathing through smoke haze, fearing for friends, and grieving at the unfathomable destruction of our critical ecosystems, our world has been forever changed. 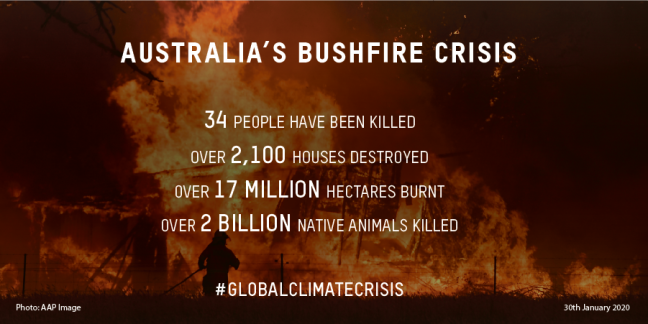 The devastating impacts of climate change from Australias bushfires

In my work, I have often witnessed the devastating impacts of the climate crisis in the Pacific and around the world. In Tuvalu and Kiribati, I’ve met families who are seeing their land and homes swallowed by rising seas. In Vanuatu and Fiji, I’ve seen communities ravaged by the most powerful cyclones ever recorded in the south Pacific. In the Torres Strait Islands, I’ve met Traditional Owners who are seeing their sacred sites and the graves of their ancestors inundated. And in India and Nepal, where shifting rains are making it harder to grow and buy enough food to eat, I’ve seen communities struggling to make ends meet.

“The climate crisis is the single greatest obstacle in the fight against hunger and poverty and has left us all with a dangerous and uncertain future.”

Of all the heartwarming offers of support from beyond our shores, none have been more pertinent than those from Australia’s Pacific neighbours. These communities have long borne the cost of Australia and the world’s inaction in the face of this climate catastrophe. And they’ve seen their calls for Australia to break free from coal ignored and even mocked.

Vanuatu’s average income is about a 20th of Australia’s — yet its government has pledged a quarter of a million dollars towards bushfire relief efforts. People there, as well as in Papua New Guinea, have been pushing wheelbarrows down the street collecting donations. Their message is simple and heartfelt — we are all in this together.

As we have watched rural and remote communities engulfed by fires, farmers crippled by drought, and First Peoples suffer the immense damage to Country, we are reminded about the great inequity — both within and between nations — that is at the heart of the climate crisis. Those who have contributed least to this crisis are bearing the brunt of its worst impacts, while the astronomically wealthy minority who have profited most from the carbon economy are out of harm’s way. A frighteningly common site across NSW: bushfire ravaged roads and forests across our landscape

More than half of global emissions can be attributed to the richest 10 percent of people. From the earliest days of the fossil fuel era, the carbon economy has led to a spectacular concentration of wealth. Even today, fossil fuel barons continue to grow their wealth as the world heats up and communities worldwide suffer the consequences.

The battle for climate justice has long been pitched as a struggle between the poor nations, which collectively have contributed little to the crisis, and the big polluters like Australia. But it is perhaps better understood as the battle between the minority of wealthy vested interests and the politicians who side with them, and the rest of us, whether we be in Tuvalu or Mallacoota.

Just as centuries of fossil-fuelled development have driven shocking levels of inequality and unequal risk, the solutions — from local renewable energy that supports our regions, to renewed respect and support for First Peoples’ land management practices — could be a great equaliser, enabling future prosperity to be more evenly shared and laying the foundations for a more just, equal and resilient future.

Eventually this unprecedented fire season will come to an end. But really, things will never be the same. Our summertime innocence has been lost. Still greater dangers lie ahead. And we cannot allow the status quo to remain. This must be the moment that Australia rises to the greatest challenge of our times and begins a rapid transition out of the fossil fuel era towards a bright and clean energy future.

We should immediately strengthen our commitments to the Paris Agreement, in line with limiting warming to 1.5C. And we must get Australia on the path to zero emissions well before mid-century, including shifting to 100 percent renewable energy and exports by 2030.

The future of our world depends on it.

Want to take action now? Show your solidarity with Australia’s bushfire survivors and everyone around the world impacted by climate change disasters. Update your Facebook profile to include this image. Together we’ll create momentum to show the Australian government that we want #ClimateActionNow. Read more about our recent united action with aid agencies: Oxfam joined with other leading aid agencies to call for greater government action to address the climate crisis.