In the final instalment of her ChangeCourse blog series, Bonnie Hook reflects on the profound emotional and inspirational impact the program has had on everyone who took part.

Each morning and evening of ChangeCourse would start with participants sitting in a circle, where we’d share our feelings and what we’d learned in a safe and honest environment.

While morning check-ins were filled with comments of “excited” and “tired”, evening check-outs tended more towards “emotional”, “mentally exhausted” and “ready to take on the challenge”. Wednesday’s circle saw tears from those who missed their families, and more from those who were overwhelmed by the intensity of the friendships they’d made in such a short space of time. On Wednesday night, we indulged in our final delicious dinner at Kinglake Wilderness Camp, followed by some Halloween scares and wombat-hunting led by Toby Adams — which I hear was something of a comedy show!

Thursday morning brought with it remorse and trepidation as we all wrestled with the knowledge that leaving the bush meant losing some of the close bonds we’d formed, as the technology we’d been cut off from most of the week reasserted itself. However, we gained comfort from Toby Adams’ assurance that “although we were losing the country surroundings, whenever we sat in the [check-in and check-out] circles, we would retain that trust and security.” Participant Kristal West spoke for everyone when she said she was “surprised to have been so affected by this experience … I thought I’d done a lot in my life, but this experience has just been incredible.”

ChangeCourse had assisted all of the participants in finding the strength they needed to tackle the “government in their continued disregard of the traditional owners and corruption in mining countries”, not to mention many other enormous challenges they recognised as adversity within their communities. ChangeCourse’s Melbourne workshops were all about supporting participants in establishing the paths and actions necessary to implement their individual programs within their communities.

The group gave facilitator Dickie Humphries a warm welcome, and over the next two days, he helped each participant focus on him- or herself, and the journeys we’ve all travelled to arrive at our respective destinations. Identifying how the choices they make impact directly on the lives they lead, participants can then harness this knowledge to bring about positive change within their communities and act as effective leaders.

The final check-out was an emotional one; with the intensity of the experiences we’d shared articulated beautifully by all. For Kenisha Gananbarr, “the best thing about the week [had] been the information and lessons I have learnt and will take back to my community”. For Amber Baker “the friendships I have made this week are ones that I know will last a lifetime”. Everyone agreed the incredible power and resilience of Indigenous culture would sustain the ChangeCourse journey over the next two years.

Friday’s final dinner celebration at Jasper Conference Centre was brilliantly organised by Oxfam’s Tash Newman. Many Oxfam staff attended, including Executive Director Andrew Hewett, and applauded as participants were awarded certificates and thanked for their dedication and enthusiasm throughout the week. Guest speaker, Megan Davis from the United Nations Permanent Forum on Indigenous Issues, spoke about her own journey of change and leadership, explaining how she’d achieved so many of her goals through determination and hard work. Looking around the room, it was easy to imagine the ChangeCourse participants making similarly fantastic contributions to community development. They are already such strong and admirable representatives for Indigenous communities around Australia.

Of course, participants were super-keen to hit the town after the evening’s formalities. The novelty of a night out in Melbourne was too hard to resist — despite their exhaustion and the reality of 4am flights home! 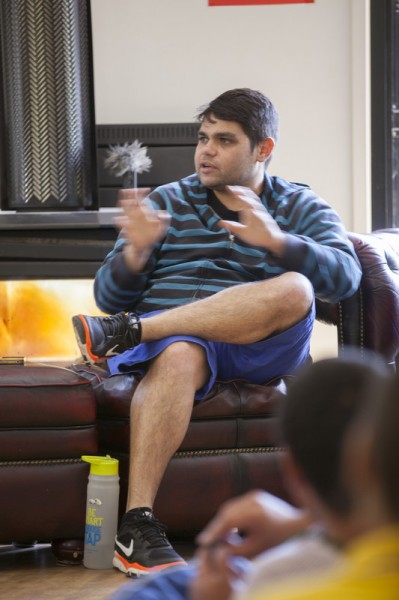 An honour and an inspiration

ChangeCourse was an amazing program to be involved in. I’d like to thank each and every participant for allowing me to share in their personal experiences of difficulties and challenges, experiences that have ultimately given them such a rich knowledge and understanding of life. It was an honour.

Karrina Nolan and Toby Adams each played an enormous role in changing the perspective of these determined and intelligent youths. Witnessing their commitment and passion for both their work and the participants’ goals was an inspiration. Throughout the week they were both consummate professionals and friends to everyone.

I particularly want to thank ChangeCourse Coordinator Peter Nathan for allowing me to partake in this life-changing experience.

I have no doubt that participants will be supported throughout their two-year ChangeCourse journey in every possible way.