Carrying the weight of war: portraits along the road to Rubaya

In the field, Water, sanitation & hygiene article written on the 01 Jun 2016

The Democratic Republic of Congo (DRC) has been in conflict for 90 years and there are two million people displaced. For the first time in decades, there is hope for peace — but ordinary people are still carrying the weight of war.

Before they were forced to flee their homes, most people would earn an income from mining or farming. Now, there are thousands who live in temporary camps, unable to access their own land.

In and around the town of Rubaya, the population is growing as people escape the violence; the influx of people is straining the already limited resources.

To survive, men, women and children transport goods along the dirt road carrying everything from coal to vegetables. Some people are walking for four days just to sell a bag of potatoes. “I have a headache and flu. I don’t go to school because we don’t have enough money … Life became harder … Only two out of twelve of us go.

“I do this walk every day alone. I left home at 8am yesterday and slept at Buhimba town on the way. I left at 6am this morning and have been walking for two hours.

“I will make more at the market there. I’ll make $3. It will buy food for the family for one day. I have to pay tax on the way.” “I am carrying yams to the market. Every day I buy vegetables to sell. It takes two hours to get there. I don’t have land to grow my own yams so I buy them to sell.” “I have been walking for two hours to get to Rubaya town and it will take me two hours to get back. I am training to be a tailor while I work … I used to farm sorghum and Irish potatoes and carry crops for six hours a day — being a tailor is better.” 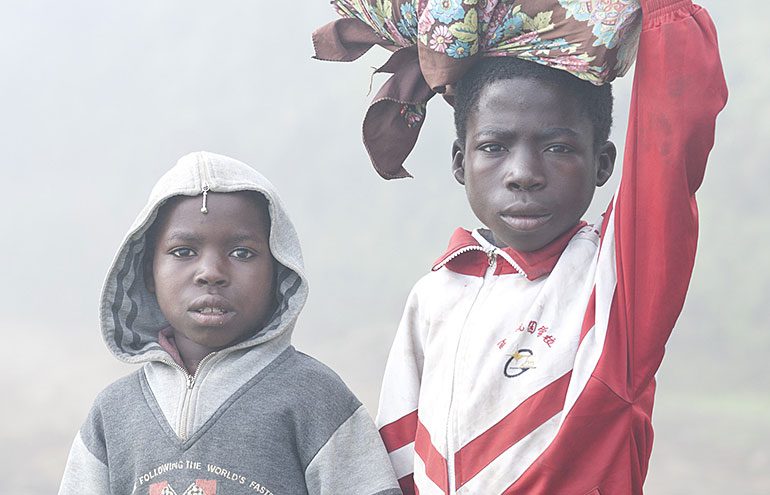 “I’m looking forward to seeing my dad today. I will tell him I met you. I will give him a big hug,” — Mohamed.

“I am carrying food and clothes … My dad works in Rubaya so I’m taking him supplies. He builds houses there. My father always tells us to go to school. He says it will brighten our future … I want to be a doctor,” — Augustin.

The ongoing conflict has also devastated water systems and health facilities in the DRC. Only two out of five people have access to potable water, and with limited access to income, clean water or healthcare, people remain at risk of preventable disease.

Oxfam first went to Rubaya when we heard there was cholera there. It was a two year response — emergency work in the first year and longer-term work in the community in the second year. Over the past two years, we’ve built gravity water systems, dug latrines and constructed showers in two camps and the surrounding communities. By forming water, sanitation and hygiene committees, we worked with local people to share hygiene information and monitor health risks.

Recently, in response to the influx of people to the area, Oxfam installed additional water tanks.

Today, Oxfam is supplying 11,000 people in Rubaya and 18,000 across three camps with water and sanitation services. But until a ceasefire is in place, more needs to be done. You can help keep families safe

They survived the violence, but they couldn’t survive without clean water. Please donate today to help families in the DRC in their fight for survival.

All photos by: Eleanor Farmer/Oxfam