What would you do in these circumstances?

Blogs, Campaigning for change, Emergencies article written on the 02 Sep 2016

It’s been 12 months since that heart-wrenching image was first beamed across the world. It still makes me ill just to think about three-year-old Alan Kurdi. The image of him lying lifeless on the beach before being carried so tenderly ashore by a Turkish police officer.

With a record 65 million people currently displaced around the world, it’s easy to forget we’re talking about real people facing real danger. People that are making extraordinary decisions every day.

Since Alan’s death, many thousands more children and their families have made similarly extraordinary decisions, and their own unimaginable journey. They are engineers, taxi drivers, nurses, hairdressers, school children and preschoolers. They are ordinary people just wanting to get on with life.

Today, we bring you the stories of just five refugee children and their families. Ordinary people forced to make extraordinary choices as they flee war, violence and persecution. Amina’s* family left Syria’s Hama Province two years ago. Two-years-old herself, she stands here in the doorway to her family’s tent that sits in an informal settlement for Syrian refugees in the Bekaa Valley in Lebanon.

Amina’s father, Jemaa Al Halayal, explains his family’s circumstances: “We [first] lived in an … abandoned room in town [with] no roof: just wooden planks that the rain came through.” Jemaa has found work to be inconsistent and has been exploited on a number of occasions.

Life is expensive, with his wife’s medical expenses and in winter it’s difficult to pay for even basic food. “Now I’m really thinking about going to Europe. But even going to Europe through smugglers, it costs a lot,” he says.

Jemaa is also aware of the danger; but it’s also dangerous to stay. Returning to Syria isn’t an option while the war is still raging.

“I want to go to Europe because at least there I will be respected as a human. As a refugee here I am not respected. I don’t mind where I go but I do hope that one day we will be able to go back to Syria,” he says. 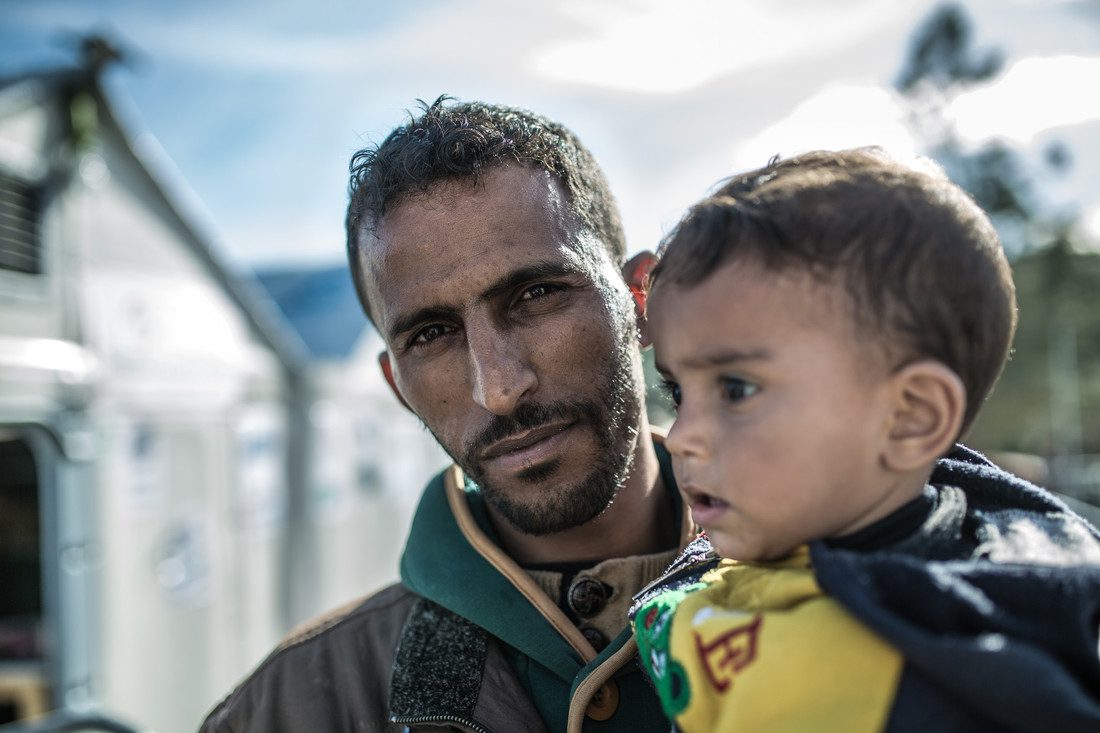 Twenty-two days prior to this photo, Omar (pictured here with his son) left war torn Syria with his family. This included a dangerous boat journey with 42 other refugees from Ezrin, in Turkey, to the Greek Island of Lesbos.

“We are farmers; but no one can live [in Syria] anymore. There is no food in the shops. There is nothing to eat,” says Omar.

The family arrived at Lesbos at dawn after being rescued by the Greek Coast Guard. At the time of his rescue, Omar had not slept in two days.

Speaking to us from the Moria refugee camp where his family received sleeping bags, warm clothing and food, Omar is not afraid of what lies ahead: “There is nothing worse than living in a war,” he says. Four-month-old Jalileh* was born in freezing conditions in the Iranian mountains close to the Turkish border. “When I got there I lay on the hay and passed out. The pain was too much,” said Jalileh’s mother. Jalileh’s father made her crib (pictured here) from metal pipes, wire, and a stitched blanket.

With their lives in danger, Jalileh’s parents left their home in Afghanistan. They spent time in Iran, but without identity documents they, like many Afghani refugees, weren’t allowed to work or remain there legally.

Having to work to survive however, Jalileh’s father was caught by police who put him in prison. “I went there crying and pleading to let him out and I told them that I was pregnant,” said Jalileh’s mother. “I had to pay a bribe … [to] the police … I sold my wedding ring and gave them the money and they let him go.”

Needing to move on, Jalileh’s mother explained how they borrowed more money from a friend of her husband’s to pay smugglers to take them to Turkey.

The road to Turkey was not easy. It involved walking through knee-deep snow with the sound of gunfire in the distance.

“I told the smugglers that I was pregnant and I was in pain, they told me to rest in an animal shed … on the side of the mountain.” Jalileh’s mother gave birth in the shed with the help of another woman in their group. “I was exhausted and not conscious properly for days. But when I heard my baby cry for the first time, I was so relieved,” she said.

Jalileh’s parents saved enough to again pay smugglers; this time to take them to Greece by boat. When the motor gave out halfway through the journey they had to be rescued, and were also taken to Lesbos.

“We worry about the future for our daughter. We hope that the borders will open. We don’t want to live with the threat of violence or being arrested anymore. We have worked all of our lives and just want a new opportunity as a family.” Ahmad Mohammad is from Homs in Syria. He sits here with two of his daughters, Sara* (11), and Rasha* (7). They fled Syria in January 2013 after a very close call. Sara was hit by a bullet; fragments of shrapnel are still lodged in her scalp.

They spent four days in Zaatari refugee camp before finding an apartment in Jordan.

At the time we spoke to Ahmad, he and his wife were still weighing up whether to find sanctuary and rebuild their lives in Europe.

He knows the journey will be a dangerous one. “We have one life and one death. I’ve faced death several times. I’ve seen people killed in front of me. By now I should be dead. [But] I’m willing to take the risk and face the danger of travelling to Europe if it will help my children have a better life,” says Ahmad. Zahia* (28) is divorced. She has a 4-year-old son (pictured). Her house is completely surrounded by red marker sticks identifying land mines. But it wasn’t always this way.

She lives on the outskirts of a small village called Husseini in Iraq. Zahia used to live with her brother, sister and their spouses. This was before her village was overrun by ISIS.

Zahia was out at the market when ISIS came to her home. Her brother mistook the ISIS fighters for Peshmerga, and spoke to them in Kurdish. Enraged, they forced him to his knees and put a gun to his head. Zahia’s sister begged for his life. The fighters eventually relented; but told them to leave. They fled, unable to take anything with them.

Zahia and her family lived as refugees until the Peshmerga and the Iraqi army liberated their village and said they could return home. When she arrived, Zahia found half her house gone, and what was left, blackened from fire.

“It’s awful to imagine ISIS living in my home,” says Zahia. “Everywhere I look, I’m reminded of them and what they’ve done. Only a few days ago an IED exploded in my yard.

As a single mum, Zahia faces all sorts of scrutiny and criticism from people in her village. But Zahia is defiant. In spite of everything, she is staying put, determined, despite everything, to give her son a good future.

With Oxfam’s support she has been able to repaint her house and reestablish her business as a tailor. She is slowly getting her life back on track.

Even given this support, Zahia’s decision to remain is truly an extraordinary act.

There are millions of stories like Zahia’s, Ahmad’s, Jalileh’s, Omar’s and Jemaa’s. And they all have to do extraordinary things in the hope of an ordinary life.

Whether displaced internally in their own country, are refugees waiting to return to their country, or are trying to start a new life elsewhere, we can support these people to rebuild their lives.

We can provide more assistance to those forced to flee their homes in search of safety. And this includes welcoming more people to Australia.

At the moment, our government is choosing not to do this. And people and families — who continue to endure dreadful circumstance, but continue to make extraordinary decisions — are being denied the right to live free from danger.

Join us in calling on the Australian Government to welcome more people to a safe life. Everyone deserves to live in safety. And everyone has the right to seek refuge when their safety and dignity is threatened.