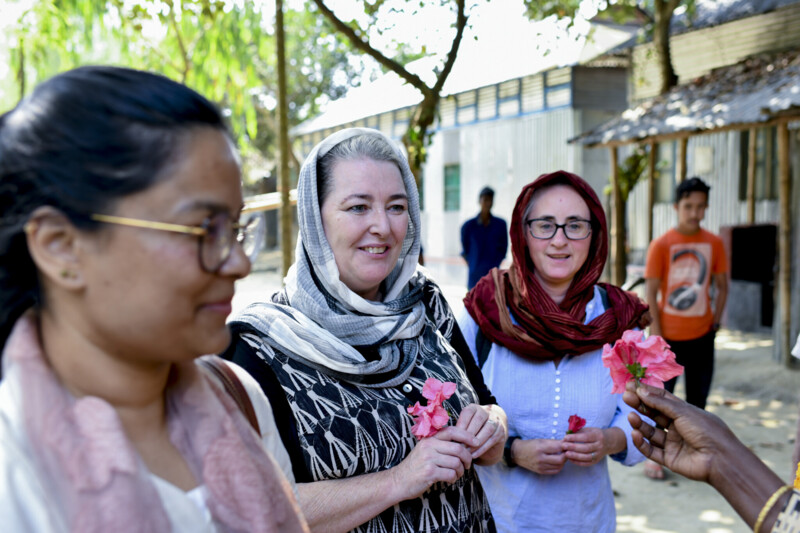 Oxfam Australia’s Programs Director, Anthea Spinks, highlights the threat of coronavirus to people in countries like PNG, Yemen and East Africa, as well as the Rohingya refugee camps of Bangladesh, and highlights recent impacts of the cyclone.

Read Anthea’s experience from the frontline of the pandemic in her words:

Earlier this year, I was lucky to visit and meet with some of my hardworking colleagues in Bangladesh. These public health professionals are now on the frontline of this pandemic, working to prevent the spread of coronavirus among some of the world’s most vulnerable populations.

In Cox’s Bazar, Oxfam Public Health Engineer Safwatul shared with pride the work he leads – alongside refugee volunteers – to support the water and sanitation needs of hundreds of thousands of people living in the sprawling camps.

And in the impoverished district of Mymensingh, one of our partner organisation’s staff members, Sauda, spoke with conviction of why she is choosing to work alongside her community and support public health interventions.

Now more than ever, these two people – and the hundreds of thousands they serve – are in my thoughts. It’s inspiring to watch them continue their lifesaving work in innovative ways, despite the challenges of movement restrictions, lack of access to materials and equipment, the risk of contracting the virus, and now, the impacts of a recent cyclone.

Cyclone Amphan swept through Bangladesh last week, impacting more than 10 million people in 19 districts. It left a trail of destruction in coastal areas, destroying hundreds of thousands of homes and thousands of schools, and killing 22 people. In the Rohingya refugee camps of Cox’s Bazar, thankfully the damage was not as bad as feared – with about 300 shelters damaged, and some flooding and small landslides reported, as well as some damage to vital infrastructure, like bridges, latrines and Oxfam’s surface water dams.

It could have been far worse – and the threat has not yet receded as the cyclone season continues and monsoonal rains are expected in the near future. The first cases of coronavirus were confirmed in the camps in early May and each day, that number rises. So now, close to a million people are facing not only the challenges that come from living in close quarters with hundreds of thousands of desperate people with an uncertain future, but also the threat of coronavirus. There are fears the virus could sweep through this incredibly vulnerable population like wildfire.

Bangladesh is just one of the dozens of countries that are in an incredibly precarious position during this pandemic. Not only because of health risks but economic ones as well.

Fortunately, there have only been eight cases detected so far, and no deaths. But any wider outbreak would be devastating.

Meanwhile in Yemen, which has been torn apart by years of conflict, just half of all health centres are functioning, and even then, there are severe shortages of medicines, equipment and staff. And more than half the population has no access to clean water. The country has recorded about 280 cases of coronavirus and more than 55 deaths. But as is the case in many less developed countries, it’s hard to know exactly how far and wide the virus has spread, given the incredibly limited testing capacity. What’s more, humanitarian workers are also bracing for another cholera outbreak.

And people in East Africa are facing a lethal combination of multiple crises. After enduring record rains and cyclones in the past two years, drought which has led to food insecurity, and further deadly flooding in recent weeks, they’re now facing the second wave of one of the biggest locust plagues in recent living history.

At home in Australia, we have also endured hardship over the past few months. And those tough times may continue for many. But this crisis has also enhanced our sense of community and connectedness. We see now more than ever that we all have a responsibility to care for each other – to check in on neighbours who live alone, and to support those local businesses that offer employment, and so much more, to so many of us.

That responsibility extends beyond our closed borders. It’s important to remember we are in fact part of a global community, not just our local one. That we are interconnected – that our actions impact on, and have consequences for, people in other parts of the world. Our Federal Government has now committed to spending tens of billions of dollars to support Australians through these challenging times. Isn’t it right that it also contributes its fair share to support people beyond our borders? Oxfam is calling on the Government to provide additional funding to support those most vulnerable people – in places like PNG, Bangladesh, Yemen and East Africa – who are facing multiple challenges and threats to their lives. You can also make a difference by donating to Oxfam’s appeal – just $27 will provide the gloves, masks and gowns that will allow an Oxfam worker to continue working in the Rohingya refugee camps in Bangladesh.

Sitting safely behind my desk in my home ‘office’, I’m humbled by the stories that flood into my inbox every day about the work our teams and partners are doing to support and help protect those who are most in need in these desperate times. But we all have a role to play. And we must ensure nobody is left behind.

Oxfam is on the ground helping the most vulnerable communities in the most water-poor countries, but we need your support. Please donate to our Emergency Appeal to support our vital, life-saving work.
Donate now