The benefits of clean water in 6 beautiful photos

Oxfam is providing clean water, sanitation and hygiene education in some of the world’s poorest countries. In fact, it’s one of the things we do best.

Below are six photos that show how clean water and sanitation are transforming communities, keeping kids healthy and most importantly, saving lives.

Clean water in an emergency:

After the Nepal earthquake: Above, Saim, 45, drinks from a tap installed by Oxfam in Tundikhel camp. She fled her home with her family when the earthquake began. Tundikhel camp was one of the biggest internally displaced peoples camps in Kathmandu with around 15,000 people sheltering there.

Oxfam installed an 11,000 litre water tank and 20 pit toilets to help address the immediate need. Since then in Nepal, Oxfam has supplied more than 35,000 people with clean water, 49,000 people with hygiene kits and installed about 7,900 toilets.

After Cyclone Pam in Vanuatu: 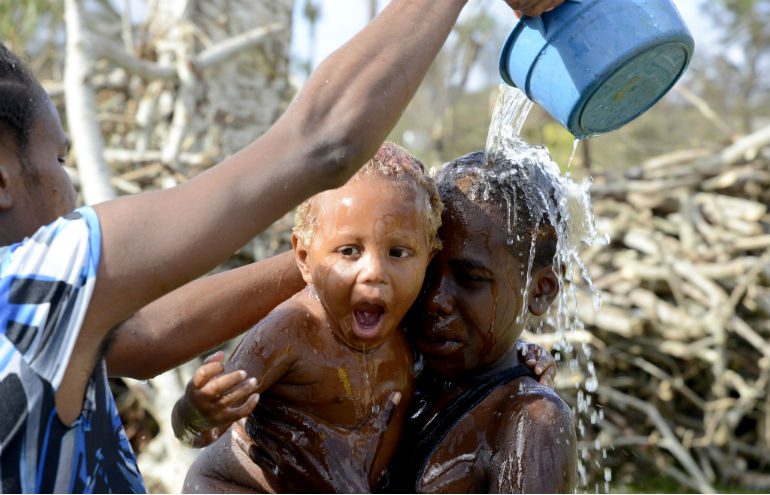 On Saturday 21 March, working with the government of Vanuatu, Oxfam distributed water to over 3000 people in the communities of Etas.

“We’ve been drinking water from the river but it’s not clean. This delivery of water will really help us but it will only last a few days. We usually drink rainwater but the cyclone has destroyed the water we had.” — Mary James.

Clean water and sanitation in and around Syria: In Syria, Oxfam has provided clean drinking water to over 1.5 million people affected by the conflict.

We’ve also provided thousands of people with clean water and sanitation in surrounding countries such as Lebanon and Jordan. With the Syrian conflict now in its fifth year, there are currently 1.07 million Syrian refugees in Lebanon (UNHCR).

Here, Hussein, 20, fills a water tank with water supplied by Oxfam at an informal settlement for Syrian refugees near the town of Zahle in Lebanon’s Bekaa Valley, on 25 January 2016. Alaya lives in Sohalia village on the edge of the Sundarbans, the world’s largest mangrove forest in south-west Bangladesh. Despite being surrounded by numerous waterways, access to clean water is a major issue for those living in the coastal region. Water is unsafe or too salty to drink.

Oxfam and the Department of Public Health Engineering of Bangladesh installed a Solar-operated Pond Sand Filter in May last year. Sadly, around 315,000 children under five die every year from diarrhoeal diseases caused by dirty water and poor sanitation. That’s 900 children per day, or one child every two minutes. (WHO/UNICEF 2014)

To combat this, Oxfam is working with local communities to teach proper hygiene.

Onima, 15, volunteers for NGO forum (an Oxfam partner) and leads hygiene promotion sessions in a community centre. Having grown up in a slum, Onima was inspired to share her knowledge of disaster preparedness and personal hygiene with others.

“When I was younger, I attended sessions like these myself. That’s my inspiration: They taught me a lot and told me to share what I know. I’m exploring my potential. Maybe others have strong potential too but because of lack of resources they don’t reach their potential.” Above, four-year-old Yolanda is showing Sammy J and Randy how to properly wash their hands using an ingenious device called a ‘tippy-tap’. With a plastic container, a few sticks and some soap, Yolanda has learnt how to keep herself safe from deadly disease. Now she’s teaching others to do the same.

“The poems she brought home and recites for us that when we eat we must wash hands and if we touch food,” said Yolanda’s grandfather, Reginald. “And when we go to the toilet we must wash hands with water and soap. She taught us really to wash our hands properly and how to dry them.”

The Melbourne International Comedy Festival has partnered with Oxfam Australia for 21 years to help fund long-term water and sanitation projects. When you donate to the Comedy Gala Appeal, you’ll be part of life-changing solutions just like these. Laughter is infectious. Water doesn’t have to be. Donate to the Comedy Gala Appeal and help save lives around the world.